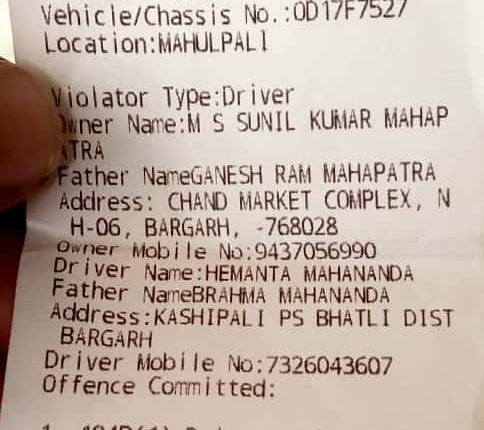 Bhubaneswar: Complaints of wrong challans being issued to people who have not violated traffic rules are coming in from several places of Odisha.

In one such instance, a Luna rider was fined for not putting on seat belt in Nabarangpur district. The fine was imposed on one Puran Pujari of Kantasa village in Papadahandi block.

According to sources, Pujari has received a message from Kalahandi police in his mobile phone in this regard.

Likewise, a fine of Rs 2,000 was imposed on a Hyva driver and helper for not wearing helmet inside the truck at Padmapur in Baragarh district.

Amid reports of Odisha Police issuing wrong challans to people who are not violating traffic rules, Commerce and Transport Minister Padmanabha Behera on Friday said if any such incident has taken place, the fines will be refunded immediately.

“Those violating traffic rules and escaping without paying penalties are being identified through CCTV cameras. Based on CCTV footage, challans are issued in their names. But I am surprised how challans are being issued to people who have not violated traffic rules. This should not happen,” Behera said.