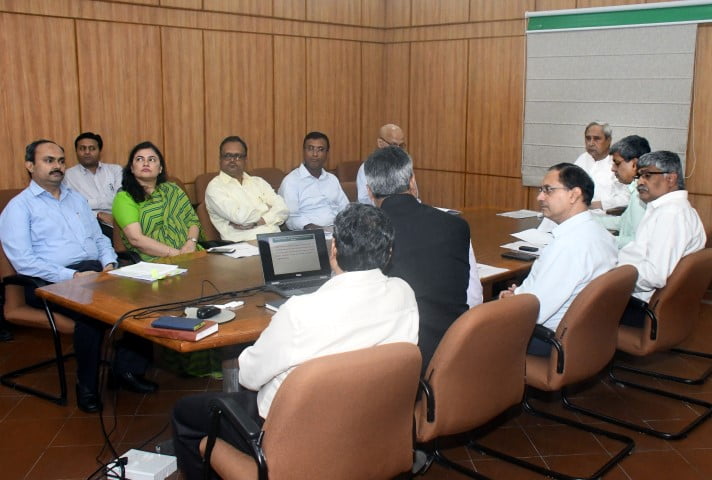 Bhubaneswar: Chief Minister Naveen Patnaik on Thursday announced a package for farmers and labourers and affected families in the drought-hit districts. According to the package, agriculture input subsidy will be provided to small and marginal farmers who have sustained crop loss of 33% and above at Rs 6,800 per hectare of land in the rain-fed/non-irrigated areas, Rs 13,500 per hectare of land in areas under assured irrigation and Rs 18,000 per hectare for all types of perennial crops. Agriculture input subsidy will also be provided to farmers other than small and marginal farmers at the same rates subject to a ceiling of two hectares per farmer. This assistance will be provided to the actual cultivators.

The agricultural input subsidy to any affected farmer shall not be less than Rs 2,000 for perennial crops and Rs 1000 for other crops. Besides, one lakh pulse mini-kits, 30,000 oilseed mini-kits and 20,000 vegetable mini-kits shall be supplied to the affected farmers during Rabi 2018-19 while 3000 pump sets shall be provided with 50% subsidy limited to a maximum of Rs 15,000. This apart, 1000 solar pump sets (0.5 HP) will be made available to affected farmers with 90% subsidy limited to Rs 54,000 per pump set under Saura Jalanidhi and 3000 sprayers will be made available to the affected farmers at 50% subsidy limited to maximum of Rs 3800 per sprayer for battery operated sprayers and Rs 600 per sprayer for hand operated sprayers. Immediate steps will be taken to arrange and distribute quality seeds in sufficient quantity for alternate cropping in Rabi season. The Odisha Lift Irrigation Corporation (OLIC) shall take immediate steps to repair the Lift Irrigation (LI) points in all the affected villages on priority. Steps shall be taken to operate all LI points during the Rabi season.

The state government will request the Centre to provide interest incentive of 3% for medium-term (conversion) loans at par with crop loans for prompt-paying to the farmers. Farmers affected by drought in Kharif shall be provided fresh finance for Rabi cultivation during the current Rabi season, which commenced from October 1, 2018.

Expeditious steps will be taken to organise Joint Liability Groups (JLG) by covering a maximum number of share croppers/oral lessees to provide them credit during the current Rabi season in the drought-affected areas. Besides, quick steps will be taken to conduct crop cutting experiments to settle the claims of the affected insured farmers under the crop insurance scheme, Pradhan Mantri Fasal Bima Yojana (PMFBY) with risks of localised calamity and mid-season adversity.

In the animal resources development sector, 20,000 landless, marginal and small farmers in the drought-affected gram panchayats will be provided livelihood support in terms of backyard poultry. At the same time, intensive fodder cultivation will be taken up in these panchayats through the distribution of suitable fodder kits.

Works will be taken up under MGNREGA by the Panchayati Raj and Drinking Water Department to establish water harvesting structures/de-silting of field channels, diversion weirs etc. Additional 50 man-days will be provided under MGNREGA. Apart from this, 100 per cent remission in respect of cess on land revenue and compulsory basic water rate will be given to farmers where the crop loss is 33% or more. The district administration shall keep a close watch on money lenders and other unscrupulous elements causing financial hardship to the farmers and the police will initiate tough action against such elements under the Odisha Money Lenders Act and various sections of the IPC. The SPs will have the responsibility to proactively deal with this while the DIGs will review the matter. The package also includes a waiver of tuition fees and examination fees in government and aided schools and colleges in the drought-affected areas.

BJD, Oppn Brace Up For Winter Session Of Odisha Assembly