CM Naveen Patnaik Welcomes All To Odisha For Hockey WC; Thanks PM Modi & Centre For Support 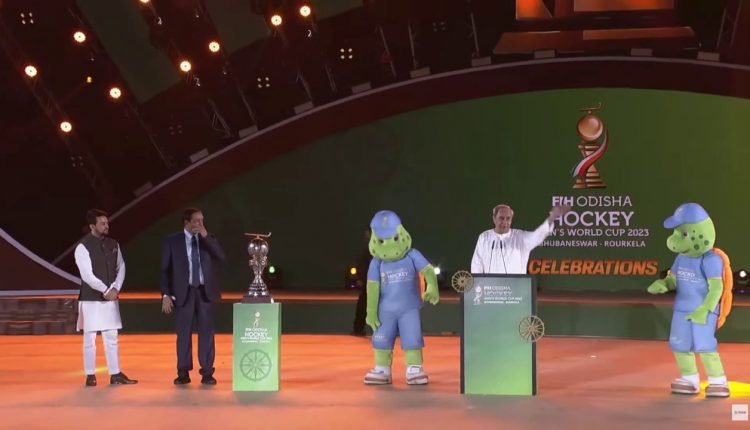 Addressing a huge gathering at the historic Barabati Stadium in the millennium city of Cuttack, the Chief Minister greeted international hockey teams, dignitaries and guests at the opening ceremony of the grand sporting event.

“Odisha is known for its hospitality. I am sure all the visitors will take a little part of Odisha home, with them,” said Naveen.

The mega international quadrennial sporting event is being hosted by Odisha for the second time in a row.

The Chief Minister concluded in his own style saying, “Hockey World Cup is being organised in Odisha. The inauguration is organised in Cuttack – ‘Apana Maane Khusi Ta, Mun Bi Bohot Khusi’ (Are you all happy? I am very happy).”

The star-studded opening ceremony was attended among others by Union Sports and Youth Affairs Minister Anurag Thakur and Odisha’s Sports Minister Tusharkanti Behera.

Describing the Prime Minister as a great sports lover, Thakur said the Union government has been doing its best to promote sports in the country under Modi’s leadership.

Hailing Odisha’s efforts to promote hockey, Thakur said Men’s Hockey World Cup 2023 will be an excellent tournament. “I am sure the games and performances will be exciting. People of Odisha will make it more vibrant and colourful,” he added.

FIH President Tayyab Ikram said world hockey owes a lot to Odisha, which happens to be the land of hockey. Top athletes will perform at world’s best stadiums in the marquee event, he said

A precursor to the Hockey World Cup, which Odisha is hosting for the second consecutive time from January 13-29, the opening ceremony in Cuttack showcased Odisha’s culture and heritage through performances and technology.

Around 35,000 people, including players and officials from 16 countries, attended the opening ceremony. Along with high-security arrangements, the Commissionerate Police put in traffic regulations for easy movement of sports enthusiasts and people to the stadium.