Cobra On Mouse Hunt Gets Trapped In Electricity Meter Box In Bhubaneswar, Rescued 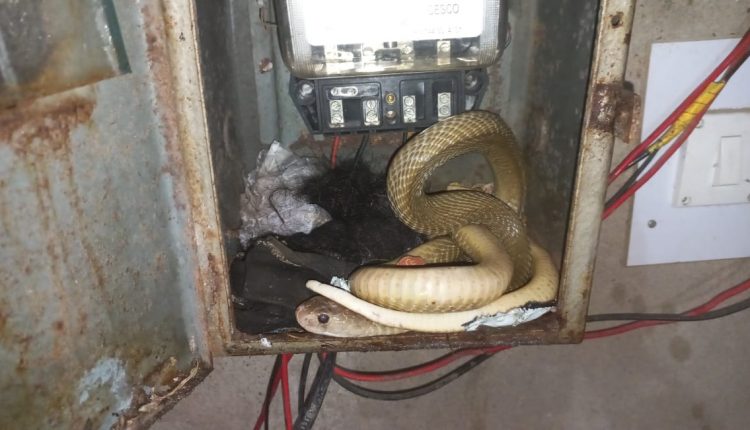 Bhubaneswar: A cobra, which had entered electricity meter box of a residential house in the city to eat mouse, was rescued on Tuesday.

Sanjukta Dalua, wife of Batakrushna Dalua, staying in Brahmeswarpatna area first spotted the cobra while it was crawling on an electricity cable in the staircase of their house in the morning. Though she shouted to drive the snake away, it went inside the meter box through a hole, cut in the box to insert the wires.

Sanjukta said as soon as the snake entered the box, two mice jumped out of it. Soon after, the cobra crept out of the box with a mouse in its mouth but went back into the box, she added.

By the time, Sanjukta’s family members had gathered at the spot and were discussing how to drive the cobra away. They also threw some phenyl mixed water inside the box. But it did not yield any result.

Finally, Batakrushna called up Snake Helpline. General secretary of the Snake Helpline Subhendu Mallik rushed to the spot. As he found the meter box sealed and it was dangerous to pull the cobra out through the hole, he called the electricity officials and informed them about the incident.

After the electricity officials broke the seal and opened the lid of the box, Subhendu brought the cobra out it with a hook. But it had become motionless apparently after smelling the phenyl.

Snake Helpline member Arun Baral washed it plain water and waited for nearly half an hour for the three and a half feet cobra to come to sense. Then he put it in a bag and took it to a forest area where he released it.

A Bit Of Everything Everyday

Deaths Due To Human-Elephant Conflicts In Odisha: High-Level Panel To Probe