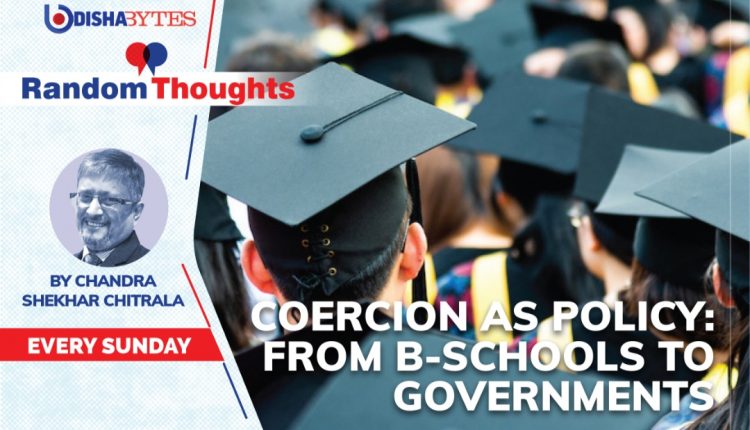 One of the first things that B-School students in India learn is about the importance of the  CAS – Career Advisory Services, or the Placement Committee as it is otherwise known.

This is the student committee that takes up the responsibility of getting summer internships for the first year students and the final placements for the second year students.

By the very nature of the work done by it, this is the most powerful committee on campus, and it has its own Manual of Policies (MoP) that have to be followed by all the students. Failure to comply with any of the rules in the MoP can invite strict action that could include being removed from the placement process.

Naturally, this leads to a lot of resentment from students who fail to understand how everything, ranging from the colour of the suits they need to wear to the type of shoes, facial hair and grooming etc can be specified as though they are a bunch of schoolchildren not students of a premier B-School.

The reason for this apparently coercive behaviour is based upon human nature and the Bell Curve.

In their 1994 book The Bell Curve, Richard Herrnstein and Charles Murray sought to explain the variations in intelligence in American society, warn of some consequences of that variation, and propose social policies for mitigating the worst of the consequences. The book’s title came from the bell-shaped normal distribution of intelligence quotient (IQ) scores in a population.

The CAS committee of almost all B-Schools works extremely hard to get companies to come to the campus and hire students. In this hyper-competitive world, when companies have a huge number of campuses they can go to, it becomes very important to ensure that not even one student causes a company to get a bad impression of the school.

Now, in tune with the bell curve, while most students realise the importance of creating a good experience for visiting companies, and ensuring that they leave the campus impressed, there are always a few students who do not understand this, and can destroy months of hard work by appearing for an interview with an unkempt stubble or a flashy jacket. The only way to rein in such students and ensure that they do not create a problem for other students or for the B-School itself, is to impose and enforce extremely strict rules for all the students.

When it comes to governance and government policies too, this is almost always the reason for imposition of what are seen as coercive laws.

Take for example the Motor Vehicles Act, which was amended in 2019. There were huge protests against the exponential increase in fines and punishments when they first came into force, but as we can see for ourselves, the number of helmetless two-wheeler drivers or four-wheeler drivers without safety belts have decreased drastically.

Similarly, even during the height of the COVID pandemic, we saw people completely disregarding safety protocols, and it was only when harsh punishments were put in place that there was a decrease in violations.

But proving the authors of the Bell Curve right, we still have people who take pleasure in not following rules and protocols, completely uncaring about the harm they may be causing others around them. And they are the reason why governments resort to coercive measures.

The problem with coercive policies is that they end up giving a lot of power in the hands of those entrusted with enforcing them. Unfortunately, as is the case almost everywhere, power corrupts and absolute power corrupts absolutely. In B-Schools, this is generally manifested in the form of undue advantages taken by the members of the CAS and on some occasions, it has also led to severe psychological trauma being inflicted upon students through humiliation and punishments. Similarly, when it comes to governance and public policy, the effects of power and the corruption that it breeds is something that all of us know.

Till such time that the numbers of those deliberately not following rules come down and coercion need not be used to enforce order, the only way to curb the ill effects of coercive policy is to put in place structures and processes to swiftly identify and punish those exploiting them for personal gain. Until then we have to resign ourselves to living with such policies.