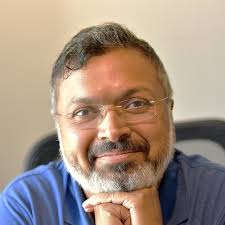 Bhubaneswar: Activist Anil Biswal has lodged a complaint against author Devdutt Pattanaik for attempting to instigate a divide in the Hindu society on the basis of caste by spreading blatant lies, fake news about the Puri Jagannath Temple in Odisha.

Biswal has accused Pattanaik of hurting the religious sentiments of Jagannath devotees with his derogatory tweets.

“It is pejorative remarks, designed intentionally to defame Jagannath Temple as well as Hindu Traditions. This person has a history of repeatedly insulting Hindu Gods and Hindu Dharma. There is no restriction on entry of any Hindus, Buddhists, Jains, Sikhs to Shri Jaganath Temple,” the activist said.

Earlier, Devdutt Pattanaik had stoked a massive controversy after falsely claiming that Dalits are not allowed to enter the Puri Jagannath Temple.

Calling the remarks made by Pattanaik false, Biswal said every day thousands of devotees of all sects, castes of Hindus including SC, ST, OBC visiting Shree Mandir and there is no issue of any caste-based discriminations at the Puri Jagannath Temple. “It is completely a false allegation that Dalits are not allowed to Shree Jagannath Temple,” he was quoted as saying by OpIndia.

The Hindu activist asserted that contrary to propaganda peddled by the likes of Pattanaik, Jagannath culture aims at the upliftment of the poor, fallen, and the downtrodden, the report added.

The activist has requested the Odisha Police to take appropriate action against the author under IPC Section 295A, 500, 505, & IT Act Section 67 for hurting the religious sentiments of devotees.

No Laser Scanning In ‘Garba Gruha’ Of Puri…