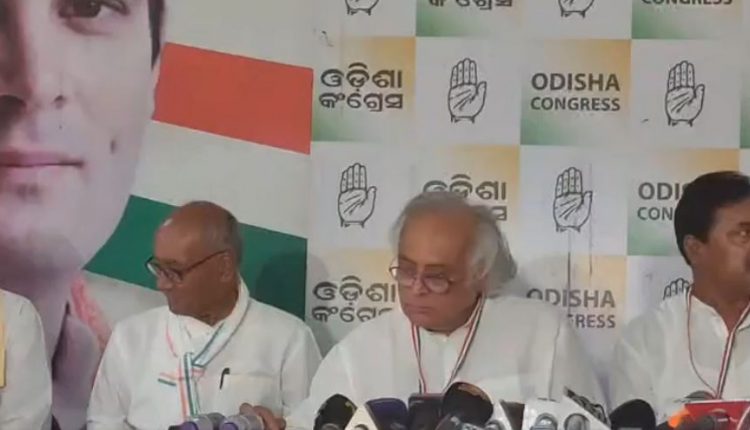 Bhubaneswar: Dubbing BJP and BJD as two sides of a coin, senior Congress leader Jairam Ramesh on Sunday said the party will target both these parties during its state-level ‘Bharat Jodo Yatra’ in Odisha with an aim to oust the Naveen Patnaik government.

Though the Biju Janata Dal (BJD) and BJP enter into mock fights in the state, the two political parties have friendly ties in in reality as they are together, the former Union Minister said at a press meet in Bhubaneswar.

Claiming that there is no difference between BJD and BJP, the AICC General Secretary In-Charge of Communication said Odisha Chief Minister Naveen Patnaik is acting as per the instructions of Prime Minister Narendra Modi.

“As BJD and BJP are two sides of the same coin, Congress will target both the political parties during its padayatra scheduled to begin on October 31 in Odisha,” said Ramesh.

“The state-wide ‘parikrama’ will seek to bring about a ‘parivartan’ (change of government) in the state,” the senior Congress leader said.

Ramesh said he along with former Madhya Pradesh Chief Minister Digvijay Singh and other senior leaders will participate in the padyatra being organised at the state level to expose both BJD and BJP.

However, at the national level the ongoing yatra led by Rahul Dandhi will continue to target BJP and RSS to make people aware of the alleged attempts being made to divide the people of the country, he said.

Claiming that the country was witnessing an undeclared emergency due to the dictatorial approach adopted by Narendra Modi government, Ramesh said attempts are being made to divide people on religious and caste lines, while the country is hit by glaring economic disparities.

Digvijay Singh said the aim of the yatra is to reach every family and household to spread the message about the manner in which constitutional institutions are being undermined by the BJP-led government. “The aim is to save the country and the constitution from attempts by BJP and RSS to split the country,” he said.

To a query, Ramesh said state-level yatras are being organised in some states including Odisha where the ongoing south to north yatra led by Rahul Gandhi from Kanyakumari to Kashmir is not passing through. May be next year, a similar yatra from east to west will possibly be organised, he said.

Giving details of the yatra in Odisha, OPCC President Sarat Pattanayak said the Congress will tell people about the failure of the BJP-led Government at the Centre and the BJD regime in Odisha during the programme to be launched from Indira Gandhi Park in Bhubaneswar on October 31.

People are facing problems like growing unemployment and unprecedented price rise, while health and education sectors are neglected, he said, adding that the 2250 km yatra for around 100 days will highlight these issues. Around 20 km will be covered daily during the programme, he said.

Hitting out at the BJD government in the state, he alleged that the Naveen Patnaik-led party is a silent spectator to all the wrong doings of the Central government. On issues relating to price rise, the ruling BJD has not uttered a word against the Centre as both BJD and BJP are working together, he claimed.