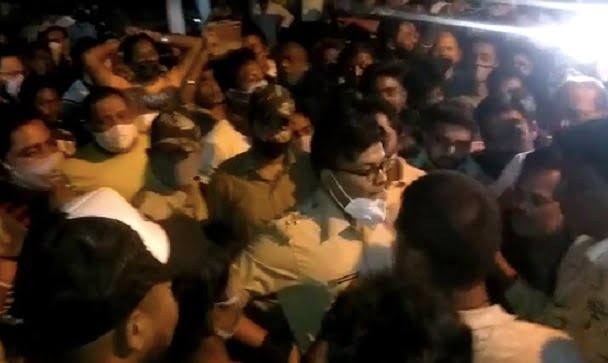 Baripada: A day after a woman cop was suspended for making a pregnant woman walk 3 km, another case of alleged police brutality came to the fore in Odisha’s Baripada on Monday.

According to sources, police personnel stopped a businessman near Saharapada bypass, while he was on his way to a friend’s house on Monday evening, for helmetless driving.

The victim alleged that he was hit on the head by the constable while parking his motorcycle and lost consciousness. “Law doesn’t permit police to beat public for no reason,” he said.

Following the incident, locals staged a protest demanding action against the erring policeman. Senior officers had to rush to the spot and pacify them. A platoon of forces was also deployed at the place to prevent any untoward incident.

Later, the constable was suspended and the driver of the police van discharged from services in this connection.

“The 6th Batallion OSAP constable RK Singh has been suspended and a home guard has been discharged from the services as per norms. A departmental inquiry has also been initiated to find out any others’ involvement in the incident. If anyone is found involved, action would be taken accordingly,” Mayurbhanj SP Parmar Smit Parshottam Das said.

The officer-in-charge (OIC) of Sarat Police Station, Reena Baxala, was suspended on Sunday for allegedly making a pregnant woman walk for 3 km. Mayrubhanj SP had ordered disciplinary action and a departmental inquiry against her for gross misconduct and dereliction of duty.

[Watch] Greedy Cobra Enters Rat Trap For A Feast In Puri, Know What Happened Next

Police Attacked For Attempt To Stop Mass Celebration In Mayurbhanj