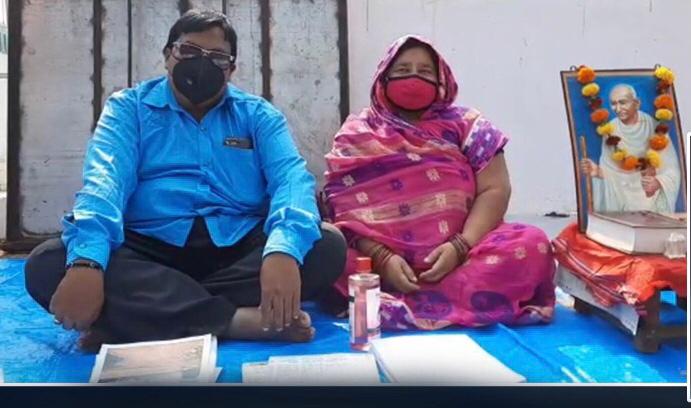 Dhenkanal: Demanding the return of their registered land from the state government, a couple has been staging a fast-unto-death protest in front of the Collector’s office in Dhenkanal.

Dense fog and winter chill haven’t been able to deter Md Tarif Hussain and his wife from sitting in front of the Collector’s office under the open sky for five days — with a picture of Mahatma Gandhi, copies of Puran, Koran, and a holy basil plant.

The Muslim couple from Dhenkanal district’s Kamakhyanagar area alleged that the government is forcefully constructing a college building and boundary wall on their registered land, for which they have the documents as proof.

They have said that the land is under Jantaribol tehsil in Kamakhyanagar block and despite several requests to the Collector and minister, nobody has taken any action till now.

They have also been requesting Chief Minister Naveen Patnaik to help them get justice.

Officials of the Collector’s office have been noticing their protest for the last five days, but none from the district administration has come forward to their help, the couple lamented.