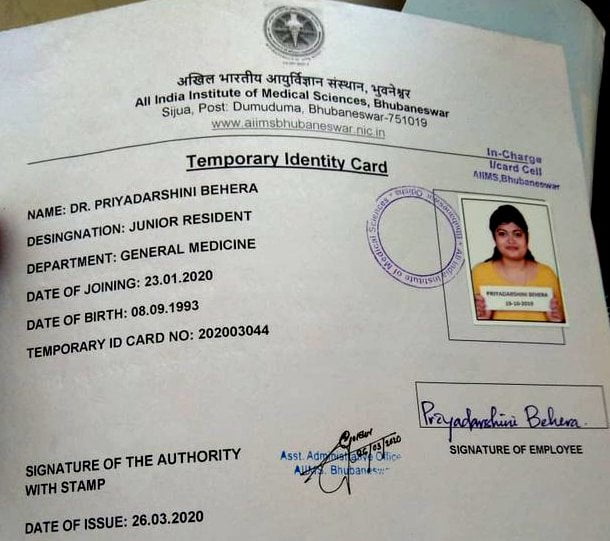 Bhubaneswar: Amid travel restrictions owing to COVID-19 lockdown, a doctor of the AIIMS-Bhubaneswar on Sunday brought serious allegations against the IIC of Nayapalli police station.

Talking to the media, Priyadarshini Behera, a junior resident doctor residing at IRC Village, said that she stopped the car at the checking point at Fire Station Square near Baramunda to obtain a pass while on her way to the hospital with her brother, who was at the wheel.

While giving her the pass , the IIC told the doctor that her brother too has to stay at AIIMS.

“I don’t know how to drive and therefore, my brother drops me at AIIMS every day. I told the IIC that it will not be proper to keep my brother waiting for eight hours at the hospital. If I have to attend to an emergency duty, the timings may get extended,” she said.

Priyadarshini alleged that the IIC instead detained her for about half an hour. “I will take up the matter with the AIIMS Director and lodge a complaint against this IIC who does not know the basic manners and etiquettes,” the doctor said.

Despite the directive by Odisha Police to allow healthcare workers to commute freely on production of identity card, some policemen on duty are not aware of it, she added.

The brother of the junior doctor narrated her plight in a tweet by tagging the CMO, Odisha DGP and Police Commissioner Sudhanshu Sarangi.

Two More COVID Hospitals To Come Up In Odisha