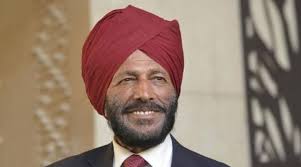 Chandigarh: Legendary Indian athlete Milkha Singh, who is battling COVID-19, was on Monday admitted to Fortis Hospital in Mohali.

The 91-year-old Milkha, once dubbed the ‘Flying Sikh’ for his prowess as a top-notch sprinter, tested positive for coronavirus five days ago, on May 19. Doctors advised him to remain in isolation at his Chandigarh residence.

According to his son, ace golfer Jeev Milkha Singh, he has been moved to hospital as a precautionary measure.

“He has been hospitalised. He was weak and not eating since yesterday, so we had to hospitalise him. Though his parameters seemed alright, we thought it safer to have him admitted where he would be under supervision of senior doctors,” Jeev was quoted as saying by PTI.

“He is under good care of doctors there. He is a strong man, always positive and will recover soon,” added Milkha’s son, who reached flew in from Dubai after his father contracted the virus.

According to hospital sources, Milkha’s condition was “stable”.