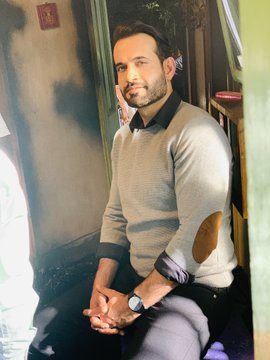 Former Indian cricketer Irfan Pathan on Monday took to his Twitter handle to share some throwback pictures from the sets of his debut film.

Sharing the pictures that were clicked while shooting in Kolkata, Irfan wrote, “What an Interpol officer doing in Kolkata?? (sic)”

Last October, makers of the upcoming Tamil film ‘Cobra’ announced that former Team India allrounder Irfan had been roped in to essay the role of an Interpol officer in the movie.

While Irfan will be playing the role of an antagonist in the film, south Indian star Vikram will play the protagonist.

The first poster of ‘Cobra’, featuring Vikram in seven different looks, was released in February.

Some days ago, the movie makers had released a song from the film titled ‘Thumbi Thullal’.

Helmed by Ajay Gnanamuthu, the film is being produced by Seven Star Studios in association with Viacom18.

Oscar-winning musician AR Rahman has been roped in to compose music for the film.

‘Cobra’ has been shot in Chennai, Kerala, Europe and Russia and will be released in Tamil, Telugu, and Hindi languages.

Bhubaneswar Gets Another Dedicated COVID Hospital