Criminal Injured In Encounter With Police In Puri 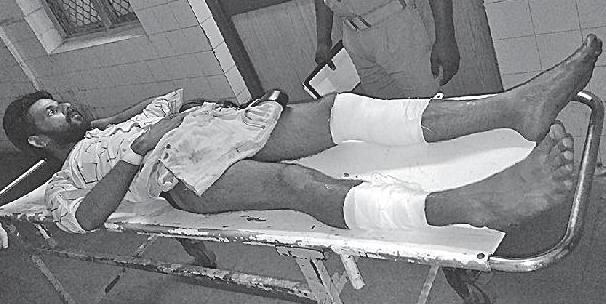 Puri: A dreaded criminal was injured in an encounter with the police in Kumutipatna area under Talabania police limits on the outskirts of Puri town on Monday night.

Rashmi Ranjan Panda, alias Gudu (28), sustained bullet injuries in both his legs and has been shifted to the SCB Medical College and Hospital in Cuttack.

Police sources said Gudu and his brother Chandan Panda arrived at a shop near Siddha Mahavir temple and opened fire at Rakesh Kumar Nayak alias Vicky (25). They then took him to Kumutipatna where they fired two rounds at his leg and fled.

A friend of Vicky found him lying in a pool of blood near a drain and rushed him to the district headquarters hospital where the doctors, after providing him first aid, referred him to the Capital Hospital in Bhubaneswar.

Following a complaint lodged by Vicky’s family members, a special team of police led by City DSP Sudhakar Panda and accompanied by Talabania police station inspector-in-charge Dheeraj Lenka began an operation within two hours, raiding the Talabani forest. Seeing the police, Gudu fired two rounds at them. But he fell down from his vehicle when the police retaliated. Two bullets hit both his legs.