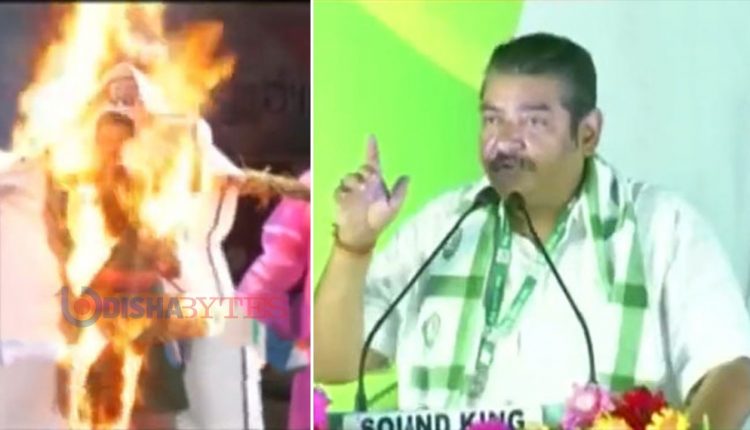 A large number of BJP workers took out a march in the Industries and Energy Minister’s Assembly constituency in Kendrapada district raising slogans against the senior BJD leader for his statement comparing Naveen with Lord Jagannath.

The demonstrators, who held placards and banners, also burnt effigies of Deb accusing him of having insulted Lord Jagannath and hurt the sentiments of the people of Odisha.

“If Naveen Patnaik is a true devotee of Lord Jagannath and if he respects the sentiments of 4.5 crore people of Odisha, he must remove Deb from the council of ministers,” Kendrapada district BJP President Kishore Panda said.

Condemning the statement of the Minister, he said Deb should resign from the ministry forthwith if he has love and respect for people’s sentiments.

Congress workers staged a similar demonstration near their party office in Aul demanding immediate ouster of Deb from the ministry. “Deb should not only resign as a Minister at the earliest but must tender an apology to the people for his insulting words about Lord Jagannath,” block congress president Manguli Charan Behera said.

The demonstration against the Minister at his home turf came a day after BJP’s youth wing – Bhartiya Janata Yuval Morcha (BJYM) – staged a protest in Puri. Members of BJYM, local leaders and servitors of Shree Jagannath temple staged a protest on Monday by lighting lamps and raising slogans against Naveen. They also warned that the minister will be prevented from entering Puri.

Meanwhile, Deb in a Twitter post has described the sharp reaction from opposition parties as unfortunate and claimed that his statement was being misinterpreted.

“It is unfortunate to see opposition parties trying to split hairs and playing unnecessary politics over my yesterday’s speech. I meant that nationally people have started recognising Odisha for #ShriNaveenPatnaik’s clean and good governance. I urge opposition parties to stop misinterpreting,” the Minister has tweeted.

While addressing a BJD meeting on Friday, Deb had said that earlier everyone around the nation used to recognise Odisha by the name of Lord Jagannath and now they instantly recognise us by name of CM Naveen.