Bhubaneswar: The Odisha government’s decision to allot land belonging to a school in Unit VI here to the IAS Officers’ Association has come under a cloud with various stakeholders questioning the intent and timing of such a move.

The fact that the BJD government had in 2019 allotted a land with a building to the IAS Officers’ Association, Odisha, at posh Sishu Bhavan Square here has also thrown up the question as to why the service association’s search for a plot to build a ‘transit house’ ended at a patch earmarked for a school playground. While the school has a total of 7.675 acres, spread over two plots, the government has decided to give 1.5 acre out of a plot measuring 2.458 acre to the service association on the ground that it is ‘unutilised’. The land belongs to gharabari (homestead) kisam (category).

Odisha Bytes broke this news on May 24.

“No space meant for public utility should be given to any service association. If the government desires, it can allot a quarters for the purpose,” pointed out former chief secretary Sahadev Sahu.

Moreover, sources told Odisha Bytes the government has also accepted to spend public money (which could be in terms of crores of rupees) to construct a suitable building on the plot to help the IAS Officers’ Association, which is a private body, to carry out its activities including lodging and recreation facilities for those belonging to the cadre.

“It is absolutely sad. There is no justification for this in today’s context,” said another retired IAS officer, referring to the prevailing COVID-19 pandemic. Secretary, IAS Officers’ Association, Odisha, Vishal Dev, who is also principal secretary, sports and youth services, was not available for comments.

What is even more galling is that the Bhubaneswar Development Authority (BDA) had, on behalf of the state government, started constructing a boundary to demarcate the plot allotted to the IAS Officers’ Association, notwithstanding protests from the old students’ association of Government High School at Unit VI and the fact that the matter is sub-judice. The Unit VI Alumni Trust, Bhubaneswar, moved court after BDA started building a boundary wall within the boundary of the playground. 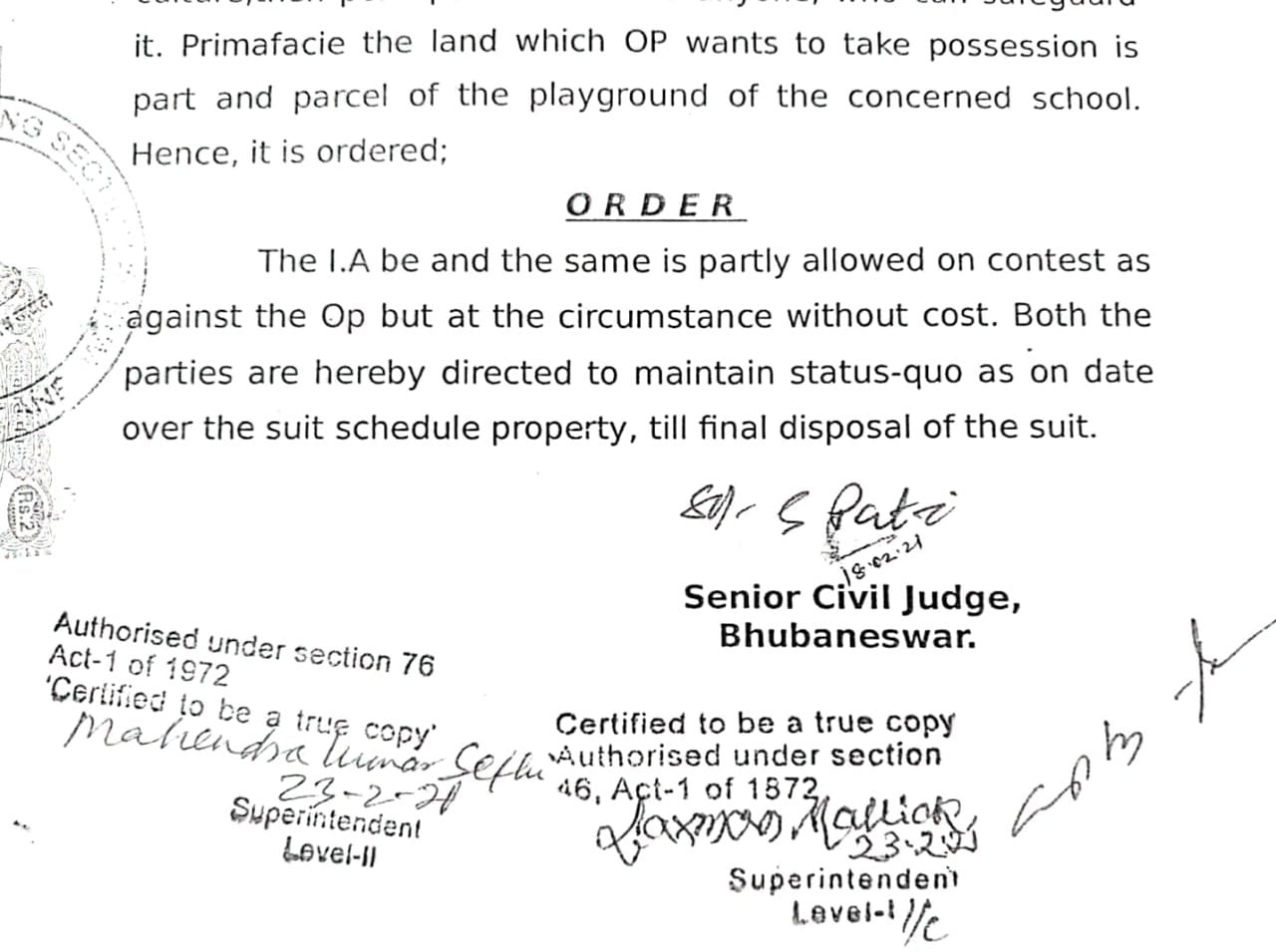 A senior government officer associated with the developments defended the government’s actions, saying: “The mention of the name of a school in the remarks column of RoR (patta) does not create an absolute title. The general administration and public grievance department is the real owner of the plot and has the right to allot it to anyone it chooses.” The officer evaded a query on why the Sishu Bhavan property would not suffice, saying, “The association had made a fresh representation.”

Lawyer Suryanarayan Das, who is representing the Unit VI Alumni Trust, Bhubaneswar, in the case against BDA, sees no merit in the government’s version. “It is an earmarked property and in use since the school came into being in the 1960s. Under the Government Grants Act, 1895, no sale deed needs to be executed for government land given for use to another government agency be it educational institutions, hospitals, crematorium etc,” he said.

In its judgement on February 23, 2021, the court of Senior Civil Judge, Bhubaneswar, observed: “Prime facie the land which OP (Opposite Party or BDA) wants to take possession is part and parcel of the playground of the school.” Despite this, the government has preferred to go ahead with its decision.

“We were initially given the impression that it would be used for expansion of Capital Hospital or to rehabilitate vendors. We had no idea that BDA was doing the whole exercise to help the IAS Officers’ Association take possession of the land, by denying the schoolkids and local inhabitants their right to the playground,” said Girija Shankar Das, a member of the Unit VI Alumni Trust.

Interestingly, sources said, going by the file processed in favour of the IAS Officers’ Association the remarks column of the record of rights (RoR) mentions that the 1.5 acre plot in question belongs to ‘Government Girls’ High School and its playground’ at Ganganagar. However, Das, who is also vice-chairman of Unit VI Alumni Trust, said the land, spread over plot numbers 670 (p) and 726 (p) of Mouza Ganganagar is reserved for playground and earmarked for the Government High School (which is meant for boys). Both schools are in the same locality.

“Our point is the patch is lying unutilised and a part of it was earlier given to BMC to run a night shelter in collaboration with an NGO. What is wrong in putting to use the remaining portion?” asked the officer, wishing not to be named.

Das, however, countered it. “How can a portion of land within a boundary wall and part of a playground be termed ‘únutilised’? The BMC night shelter though adjacent to the playground is constructed over ‘nayanjori’ land and cannot be equated with the other portion,” he contended, adding, “Even if the government wishes to divert a portion, it has to de-reserve it following the due process of law. The government cannot be law unto itself.”