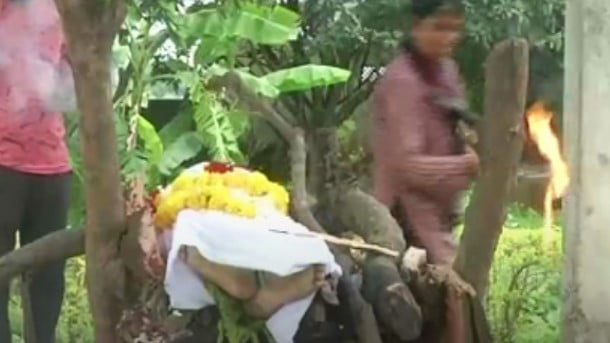 Koraput: An officer of the Child Welfare Committee and chairperson of the Child Protection Committee performed the last rites of an orphan boy after his relatives refused to do so.

Police said the boy, Jayadhar Jani, was a Class X student of Jeypore Sishu Sadan. He had committed suicide by hanging himself in a bathroom of his school hostel at Parabeda near Jeypore on Monday night.

The hostel authorities took him to the Koraput district headquarters hospital, but doctors there declared him dead. Later, police sent the body for postmortem.

On Tuesday, Childline and Child Welfare Committee (CWC) officials visited the school for an investigation.

Meanwhile, none of the deceased’s relatives came to the hospital to claim his body after the postmortem.

They performed the last rites with all rituals with Rajashri Das lighting the funeral pyre.

According to sources, Jayadhara had lost his parents at a very tender age. He had been staying at the hostel for the past seven years.

Police were yet to ascertain why took the extreme step.

Three Arrested With Brown Sugar Worth Rs 1L In Bhubaneswar

Last Rites Of Eminent Writer Manoj Das To Be Held At…