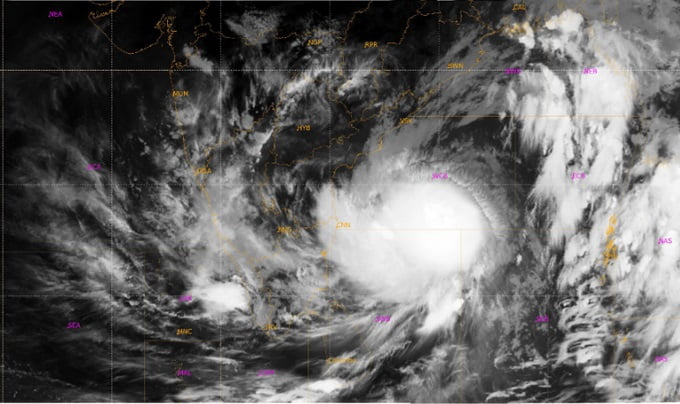 Bhubaneswar: Severe Cyclonic Storm Asani lay 680 km north-northeast of Puri in Odisha on Monday morning and is moving northwestwards at a speed of 25 kmph, according to the latest update by the Meteorological Centre in Bhubaneswar.

Distant Warning Signal 2 has been hoisted at all ports in Odisha in view of the approaching cyclone.

The cyclone is very likely to move northwestwards till May 10 night and reach westcentral and adjoining northwest Bay of Bengal off north Andhra Pradesh and Odisha coasts.

The season’s first cyclone is set to skip Odisha, recurving in a north-northeast direction towards West Bengal and Bangladesh off the Andhra Pradesh and Odisha coasts. Under its impact, the day temperature will come down by 3 to 4 degrees Celsius at many places in Odisha.

The cyclone is likely to trigger widespread rain in Odisha, West Bengal and Andhra Pradesh from Tuesday, the Indian Meteorological Department (IMD) said.

In fact, Cyclone Asani could trace a path similar to Cyclone Jawad that developed in the Bay of Bengal and swerved past close to south Odisha in December last year.

Cyclone Asani saw rapid intensification at three stages on Saturday — first into a well-marked low-pressure system, then into a depression and deep depression by night, indicating the extent of warming of the Bay of Bengal this time of the year.