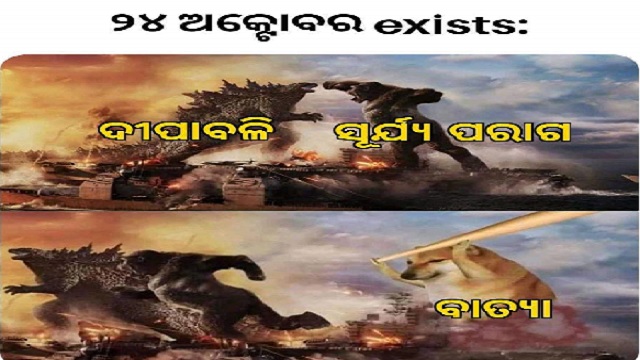 Bhubaneswar: The anticipated cyclone ‘Sitrang’, which is likely to form over westcentral Bay of Bengal around October 24, and the rain forecast have dampened the plans for Diwali get-togethers and bursting green crackers in Odisha after a gap of two years. It has also poured cold water on excitement among stargazers about a partial solar eclipse on October 25, which will be visible in the state.

“The phenomenon will occur for only 20 minutes in Bhubaneswar from 4.56 pm to 5.16 pm,” Deputy Director of Pathani Samanta Planetarium Subhendu Pattnaik told Odisha Bytes.

A partial solar eclipse occurs when the moon comes between the Sun and the Earth but the three don’t align in a perfectly straight line. It will begin in Iceland at around 2.29 pm and will be seen at its maximum from Russia at 4.30 pm. It will end at around 6.32 pm over the Arabian Sea and will be visible mainly from parts of Europe, North-East Africa, and West Asia.

While the India Meteorological Department (IMD) on Thursday said that the cyclone is likely to move gradually north-northeastwards & reach near West Bengal – Bangladesh coasts on October 25, skirting Odisha coast, the state will experience heavy rain from October 23 and the intensity will increase further in the next two days. So far, yellow alert has been sounded for Puri, Kendrapada and Jagasinghpur on October 23.

While the weatherman has advised fishermen not to venture into the Bay from October 22 and along and off Odisha coast from October 23, a forecast on the intensity and wind speed of the cyclone is yet to be made.

The cyclone forecast has dashed the hopes of diya makers and cracker dealers for making brisk business in the state.