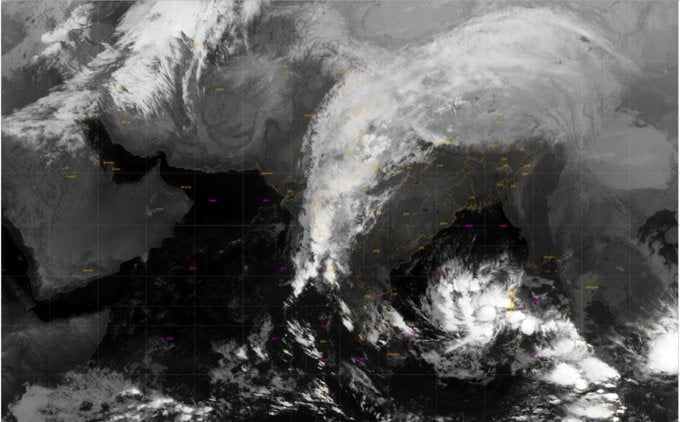 Bhubaneswar: The low pressure has progressed further to southeast Bay of Bengal adjoining Andaman Sea and is now well-marked. It will intensify into a depression today and become a cyclonic storm in the 24 hours, the India Meteorological Department (IMD) said, in an update on the cyclone set to hit the Odisha coast on December 4.

“Though it’s clear that the cyclonic storm will approach the Odisha coast, it’s too early to say where it will make landfall and other details. The exact position, path and location of the cyclone crossing the coast and its intensity and time will be known only after the depression is formed,” he said.

The office of Special Relief Commissioner has emphasised on evacuation of people from low-lying areas and keeping shelter homes ready.

Chief Secretary Suresh Chandra Mohapatra also reviewed the preparedness on Tuesday with collectors of the districts, likely to be affected by the cyclonic storm.

The NDRF and ODRAF as well as fire-fighting teams have been asked to remain on alert. Coastal districts and collectors of Mayurbhanj and Nayagarh have also been asked to stay alert.

A total of 200 fire-fighting teams and 108 ODRAF and NDRF teams have been kept ready, informed the Chief Secretary.

In an advisory to collectors of all districts, the SRC has asked district heads to continuously monitor low-lying areas and carry out dewatering activities wherever necessary on urgent basis. Similarly, the control room should function round-the-clock, the advisory stated.

Red warning has been issued for the districts of Ganjam, Gajapati, Puri and Jagatsinghpur. District under Orange and Yellow warning have been asked to remain prepared to meet any waterlogging or localised flood-like situation, including urban areas and possibility of landslide in hilly areas.

On the other hand, fishermen have been advised to not venture into the southeast and adjoining east-central Bay of Bengal on December 2 and 3, west central and adjoining northwest Bay of Bengal and along and off North Andhra Pradesh – Odisha – West Bengal coasts during December 3 to 5.