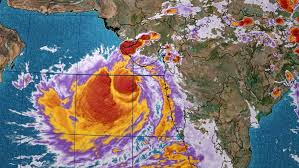 Cyclone Vayu weakened into a low pressure and crossed Gujarat’s coastal Kutch district on Tuesday morning, causing rainfall at some places in the state, news agency PTI reported from Ahmedabad.

Rains are likely to continue till Wednesday in Kutch, Saurashtra and north Gujarat regions because of its impact, a Met official said.

“Cyclone Vayu converted into a low pressure area when it crossed over Kutch in the morning. This will cause rainfall in the region,” PTI quoted Manorama Mohanty, a scientist at the India Meteorological Department’s (IMD) Ahmedabad centre, as saying.

“Warning for ports has been lowered, but the advisory for fishermen will continue till Wednesday morning. The low pressure system is going to further weaken,” she added.

The low pressure system will cause strong winds over northeast Arabian Sea and adjoining Saurashtra and Kutch regions with a speed of 30-40 kmph gusting to 50 kmph till Tuesday evening, an IMD release said.