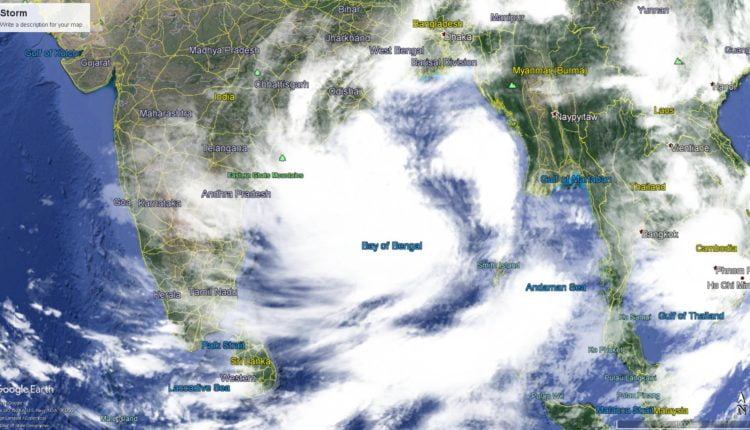 Bhubaneswar: The depression in the Bay of Bengal is likely to develop into a cyclonic storm, Yaas, by Monday ( May 24) and intensify into a ‘Very Severe’ cyclone during the subsequent 24 hours. The system with possible wind speed gusting to 185 km per hour is likely to cross the coast between Paradip and Sagar Island on Wednesday (May 26) evening.

“The longer it will stay in the sea, the more severe it is likely to become,” said India Meteorological Department (IMD) DG Mrutyunjay Mohapatra.

Cyclone Yaas—named by Oman after the Jasmine tree — is likely to be of the same intensity as cyclone Tauktae, which hit the western coast of India last week, and a little less than May 2020 cyclone Amphan, he added.

While the IMD has earmarked a long-range based on the direction (north-northwest or northwest) of the movement of the system, the European model ECMWF and weather scientists at Accu Weather have predicted the landfall to take place between Balasore in Odisha and Haldia in West Bengal. The Global Forecast System shows landfall between Rajnagar (Kendrapada) and Dhamra (Bhadrak).

The ace oceanic research institute of India (INCOIS) under the Ministry of Earth Sciences, has said that the landfall will take place in the morning hours of May 26 in West Bengal bordering very close to Balasore.

The US-GFS model shows landfall in Odisha between Paradip and Balasore.

The direction of the cyclone, exact place of landfall and wind speed, however, can be predicted accurately only after the system develops into a cyclonic storm on Monday, IMD sources said.

>> The cyclone will have a damaging impact in Jagatsinghpur, Kendrapada, Bhadrak and Balasore with likely storm surge of about 2- 4m in these coastal areas.

>> The wind speed may touch 130kmph in Balasore district and 100 kmph in Bhadrak and Kendrapada. These districts are likely to record over 200mm rainfall.

>> North Odisha district Mayurbhanj and coastal Cuttack may experience heavy precipitation under influence of the cyclone.

May 25: Light to moderate rainfall will take places at many places with heavy to very heavy rainfall in the north coastal districts.

May 27: Heavy to very heavy rainfall at isolated places in north interior Odisha.

Isolated heavy to very heavy rainfall is likely over south coastal districts of Odisha during May 25-26.

Squally wind speed reaching 40-50 kmph gusting 60 kmph is very likely to prevail over North Bay of Bengal and along and off Odisha, West Bengal and Bangladesh coasts from the evening of May 24.