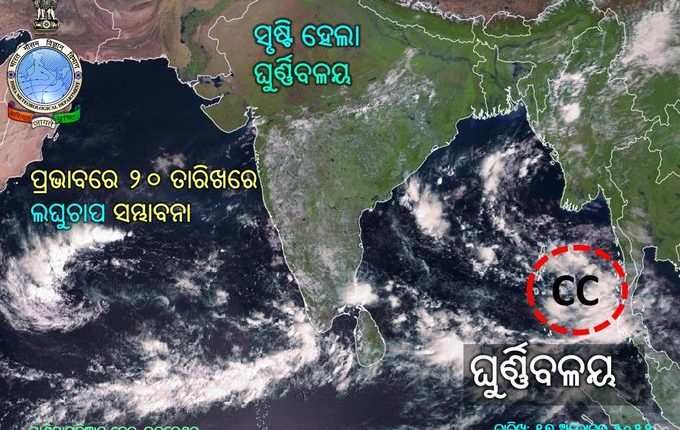 Bhubaneswar: A cyclonic circulation has formed over the south Andaman Sea and its neighbourhood, the India Meteorological Department (IMD) informed on Monday.

The system is likely to intensify into a low pressure over southeast and adjoining eastcentral Bay of Bengal around October 20 and become more marked after moving west­northwestwards towards west-central and adjoining southwest Bay of Bengal during the subsequent 48 hours, it added.

There is no possibility of cyclogenesis (depression) during the next 120 hours, the IMD said in its Tropical Weather Outlook for North Indian Ocean.

The MeT office had earlier said that there is a moderate probability that the low-pressure area will move west-northwestwards and concentrate into a depression over the west-central Bay of Bengal at the beginning of the October 21-27 week. “Odisha is expected to receive rainfall under the influence of low pressure. Details on intensification, path and impact of the system on the state can be ascertained in the next two days,” IMD DG, Dr Mrutyunjay Mohapatra told the media.

The national weather forecaster has issued no rainfall warning till the morning of October 21 while predicting light to moderate rain in coastal and southern districts of the state. The intensity of rain is likely to increase from Wednesday, it added.