Cyclonic Circulation Forms Over Bay, Rain Intensity In Odisha To Increase From Tomorrow 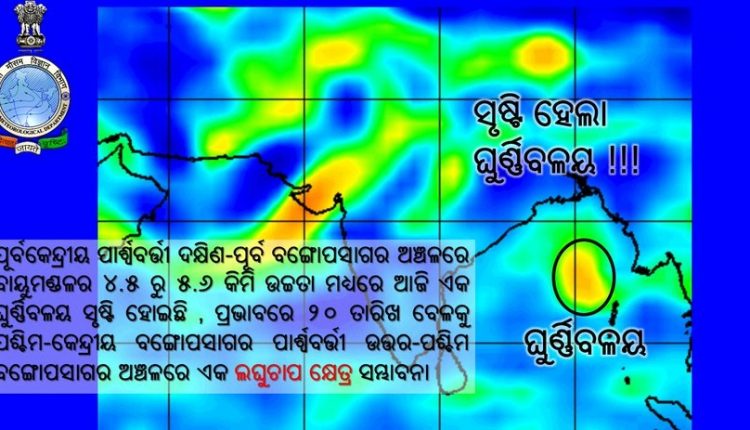 Bhubaneswar: A cyclonic circulation has formed over the southeast and adjoining east-central Bay of Bengal, the regional centre of India Meteorological Department (IMD) informed on Saturday.

Under its influence, a low-pressure area is likely to form over the northwest Bay of Bengal by September 20.

The cyclonic circulation and subsequent low pressure are likely to increase the intensity of rain in Odisha from September 18 with heavy rainfall ( 7 to 11cm) forecast for one or two places in Kalahandi, Kandhamal, Balangir, Gajapati, Ganjam, Puri and Jagatsinghpur.

Heavy to very heavy rainfall ( 7 to 20cm) is likely at one or two places in Boudh, Angul, Sonepur, Kandhamal, and Kalahandi on September 20. Heavy rainfall ( 7 to 11cm) alert has also been sounded for one or two places in Gajapati, Ganjam, Puri, Khurda, Nayagarh, Cuttack, Jagatsinghpur, Dhenkanal, Keonjhar, Mayurbhanj, Deogarh, Sambalpur, Bargarh, Balangir, Nuapada and Rayagada during this period.

According to SOA’s Centre for Environment and Climate (CEC), the system was likely to move in a north-westerly direction towards western Odisha and Chhatisgarh from September 21 but would have its impact on coastal Odisha up to September 20.

Western Odisha districts could experience heavy to very heavy rainfall in one or two places on September 21 and 22, the bulletin said adding Bhubaneswar city could get moderate rainfall on September 20 and 21, it added.