Cyclonic Circulation Over Bay On Sept 7, LOPAR In Next 48 Hours: Bhubaneswar Met Centre 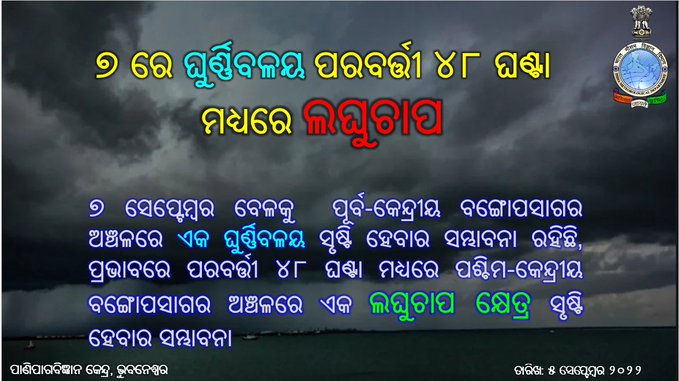 Bhubaneswar: A cyclonic circulation is likely form over the east-central Bay of Bengal around September 7, Bhubaneswar Meteorological Centre informed on Monday.

The system is expected to intensify into a low-pressure area (LOPAR) over west-central Bay of Bengal in the subsequent 48 hours and trigger heavy rain in Odisha, it added.

Notably, the MeT office has issued yellow warning for heavy rainfall from September 5-8. Heavy rainfall is likely to occur at one or two places in Ganjam, Gajapati, Kandhamal, Keonjhar, Mayurbhanj, Malkangiri, Koraput and Rayagada during the next 24 hours.

In its North Indian Ocean Extended Range Outlook for Cyclogenesis, the IMD said earlier that there is a likelihood of formation of cyclonic circulation/low-pressure area over westcentral and adjoining northwest Bay of Bengal during week 1 (September 2 to 8) and week 2 (September 9 to 15).

According to SOA’s Centre for Environment and Climate (CEC) director S C Sahu, low pressure is likely to form along the west-central Bay of South Odisha-North Andhra Pradesh coast on September 9.

No One Texted Me Except Dhoni When I Quit Test Captaincy: Kohli’s ‘Virat’ Revelation [Watch]

Odisha: Teachers Have Different Tales, Some Go Extra Mile With Mission, Others Forgotten