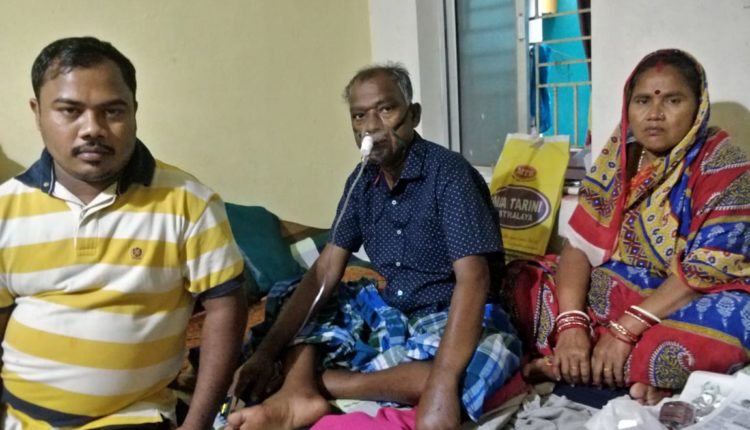 Bhubaneswar: A critically ill daily labourer could be saved from the brink of death due to timely intervention of Odisha Mo Parivar.

An acute diabetic patient, daily wager 57-year-old Prafulla Mallik of Bankoi in Khurda district was unable to take medicine despite knowing his ailment due to his family’s poor economic condition. As his condition worsened, his family admitted him in Capital Hospital, here on November 27.

Various tests in the hospital confirmed that Prafulla’s vital organs – heart, kidney and lungs – were severely affected. As his condition deteriorated, he was referred to SCB Medical College and Hospital in Cuttack. Here also, the doctors expressed their helplessness to help him survive.

As a last resort, Prafulla’s family admitted him KIMS Hospital here. Due to the efforts of the doctors of the hospital, his condition improved and the family members heaved a sigh of relief. But it was short-lived.

When they were given a bill of Rs 1.5 lakh, they were crestfallen and expressed their inability to make the payment from their all possible sources.

Fortunately, Odisha Mo Parivar came to know about the condition of Prafulla and his family and mobilised its resources to help them. The organisation managed to get Rs 1.3 lakh sanctioned from the Biju Swasthya Kalyan Yojana for the treatment of Prafulla.

Following subsequent treatment, Prafulla is on the way to total recovery bringing relief to his family, according to a release of Odisha Mo Parivar.

Odisha Mo Parivar was launched by chief minister Biju Patnaik as a non-political initiative to work for improving health care services, protection of environment and addressing issues of Prabasi Odias in Odisha.