Day Temperatures In Odisha Likely To Rise From March 13 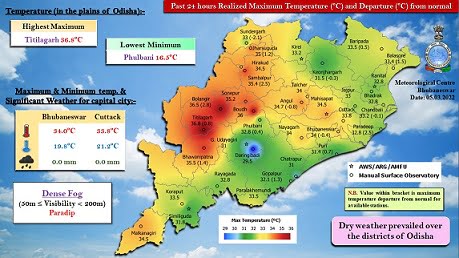 Bhubaneswar: Day temperatures in Odisha are likely to rise from March 13 as moisture flow to eastern India could get cut off by an existing upper air trough moving eastwards, the Centre for Environment and Climate (CEC) of SOA said on Saturday.

Some places in the state are expected to register temperatures between 37 and 39 degrees Celsius, a CEC bulletin here said.

The prevailing day temperatures in coastal Odisha (33 to 35 degrees Celsius) and interior districts (35 to 37 degrees Celsius) will prevail up to March 12 because of flow of moisture from Arabian Sea to eastern India and existence of an upper air trough, the bulletin said.

Dry weather prevailed over most of Odisha on Saturday.