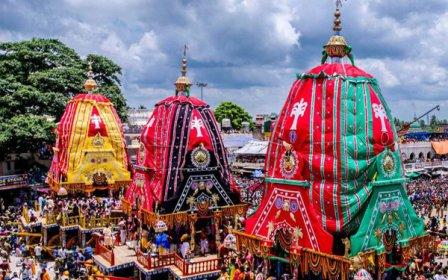 Puri: Daitapati sevayats on Friday began preparations for the return journey (Bahuda Yatra) of the sibling deities from Gundicha temple to their original abode at the Jagannath shrine here.

After completion of the initial rituals of the deities early in the morning, the sevayats (priests) performed the Senapata Lagi and Mangalarpan rituals much ahead of schedule.

The ceremonial pahandi (procession) of the deities began at 9.30 am, around three hours before schedule, as the sevayats brought Lord Sundarshan on their shoulder to the Debadalana chariot of Devi Subhadra. This was followed by the pahandi of Lord Balabhadra at 9.50 am to the Taladhwaja chariot, Devi Subhadra at 10.20 am and Lord Jagannath to the Nandighosa chariot at 10.25 am.

After the presiding deities are placed atop their chariots, the Gajapati Maharaja Dibya Singh Deb will conduct the chhera panhara (sweeping) rituals. The sevayats will later remove the charamala (ladder made of palm tree logs) from the chariots. Then the pulling of the chariots will begin.

As the rituals for the occasion have been completed much earlier, the pulling of the chariots will begin ahead of schedule.

Elaborate security arrangements have been made in Puri for the smooth conduct of the festival.

After 27 Years, England Make It To World Cup Final