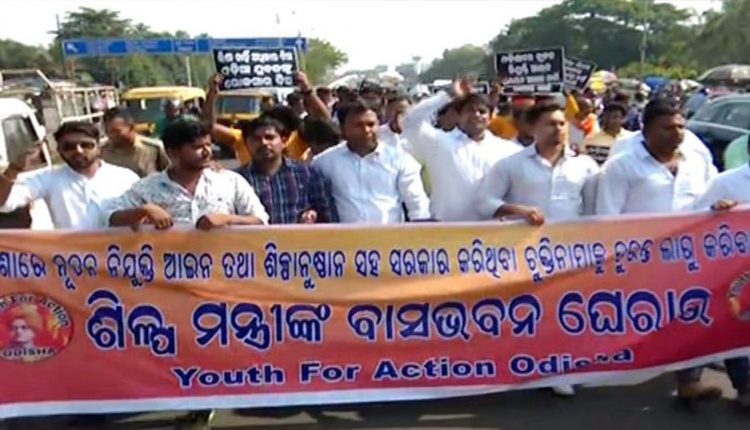 Bhubaneswar: Demanding employment to the jobless in industrial units in Odisha, members of ‘Youth For Action’ staged a demonstration and scuffled with police while trying to gherao the residence of Odisha Industries Minister Pratap Keshari Deb.

A large number of agitators took out a rally and jostled with police personnel as they were restrained while trying to march towards the house of Deb, Minister for Industries, Energy and MSME, in Bhubaneswar on Wednesday.

Alleging that the state was facing growing unemployment, the protesters demanded that the government take immediate steps for providing jobs to the unemployed youth by ensuring implementation of the agreement signed with different industries.

During the last 22 years, the Odisha government has signed over 200 MoUs with different companies in various sectors like steel, aluminium, thermal power and petrochemicals, they said.

The MoUs were aimed to absorb at least 90 per cent of the total unskilled and semi-skilled workers for the firms from Odisha. However, the government has failed to implement the pacts and the number of local people in the industries is less than 10 per cent, the protesters claimed.

“We demand that the government enforce a law to reserve 80 per cent employment for Odias in the industries set up in the state,” said a leader of the ‘Youth For Action.’

‘Swathya Sanjojak’ To Strengthen Help Desks At MCHs In Odisha

Fog Alert For 6 Districts; Temp To Remain 2-4°C Below Normal Across Odisha