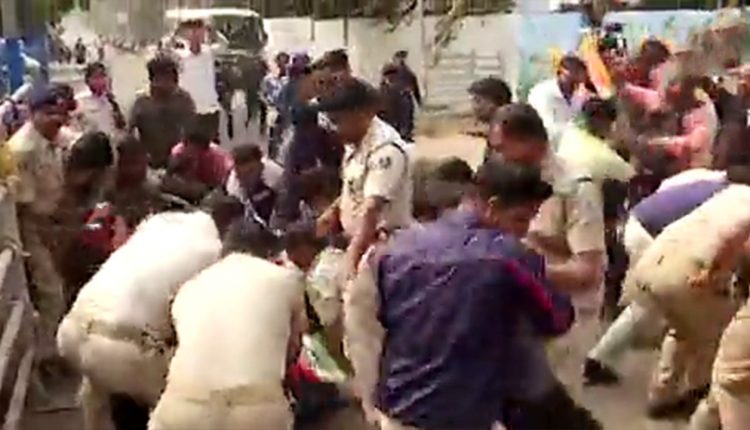 Bhubaneswar: Activists of farmers’ outfits staged a demonstration outside the residence of Odisha’s Minister of State for Home Tusharkanti Behera in Bhubaneswar on Saturday protesting arrest of 12 farmers during a recent agitation.

The protesters alleged that police took action against farmers during their statewide agitation on Thursday instead of mandi officials and millers responsible for irregularities in paddy procurement. In Jagatsingpur,  as many as 12 farmers were arrested in false cases, they alleged, demanding resignation of the Minister.

Stating that the farmers had launched a state-wide protest over irregularities in paddy procurement on Thursday, they said police arrested as many as 12 farmers in Jagatsinghpur though we were holding a silent and peaceful protest.

As the demonstrators tried to gherao the Minister’s residence,  the police personnel deployed at the site prevented them from proceeding and too several of them into custody as a preventive step.

The protesters raised slogans against the state government and demanded release the arrested farmers at the earliest.

On Thursday, farmers and their supporters under the banner of Naba Nirman Krushak Sangathan (NKSS)  had staged demonstrations at the offices of collectors in different districts including Jagatsinghpur, Bhadrak, Jajpur, Keonjhar, Khurda, Nayagarh and Mayurbhanj, demanding procurement of unsold paddy from the farmers under the MSP fixed by the Central government.