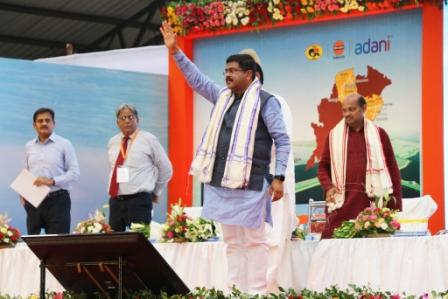 Bhubaneswar: Union Petroleum and Natural Gas Minister Dharmendra
Pradhan performed bhumi pujan (ground breaking ceremony) of the Rs
6, 000 crore Liquified Natural Gas (LNG) terminal at Dharmra Port on
Saturday.
“The 5-MMTA capacity LNG terminal would play a significant role in accelerating the process of development and employment growth in eastern India. The construction work for the new terminal would commence from December this year and the project would be commissioned by 2019-20,” Pradhan said.
A 2,539-km long pipeline network would be laid at a cost of Rs 13, 000 crore for transportation of natural gas to various households in Bhubaneswar, Cuttack, Jharsugida, Angul and Rourkela, he added.
Chief Minister Naveen Patnaik did attend the programme despite being invited to it. Many BJD MPs and MLAs also skipped the event.
BJD spokesperson Pratap Keshari Deb said, “Though the chief
minister had given his consent to attend the programme, he later
decided to skip it as the event was being politicised.”