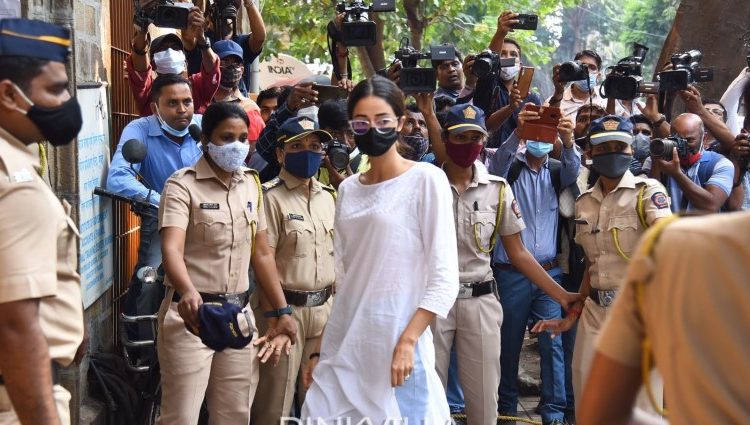 Mumbai: Upcoming Bollywood actress Ananya Pandey, who is actor Chunky Panday’s daughter and under Narcotics Control Bureau (NCB) scanner after another star son, Aryan Khan’s arrest in Mumbai drug bust case, has apparently told the Bureau she “knows someone who can supply, or has once or twice supplied drugs” to Aryan.

News18 quoted sources as saying the NCB had questioned a 24-year-old house-help of a “famous person” on Friday, who is “believed to have peddled drugs to Aryan at the behest of Ananya”. The ‘celeb staff-cum-drug peddler’ was detained from Mumbai’s Malad area, and has been called for questioning again on Monday. The NCB confiscated his mobile phone after a long interrogation, sources added.

Notably, Ananya was called for questioning by the NCB on Thursday and Friday but turned up late, prompting zonal director Sameer Wankhede to say “this is not a production house.”

The NCB had allegedly retrieved her chats with Aryan Khan regarding drugs from the his phone during its investigation, which the agency is believed to have submitted in the special court that rejected Khan’s bail.

When quizzed about the chats, Ananya said that she was discussing cigarettes, sources told News18. “Ananya said that she isn’t a supplier and doesn’t know that weed and ganja are the same. Her friends would call it a joint, and she has once or twice taken puff at get-togethers,” sources said.

A report in India Today, however, quoted NCB as saying that at one point in the conversation between Aryan Khan and Ananya Pandey, Aryan was talking to Ananya about ganja. He was asking if there could be some ‘jugaad’ to arrange the weed. To this, Ananya replied, “I will arrange”, the report stated.

Sources further told News18 that NCB is digging into the international handlers for providing drugs. “Probe not just limited to WhatsApp chats discussing procurement of drugs. NCB is trying to piece together the entire chain of international handlers, drug peddlers and consumers,” they added.


Also read: Was Ananya Panday ‘Joking’ When She Agreed To ‘Arrange Ganja’ For Aryan Khan?

Odisha Schools To Reopen Next Month? Teachers Asked To Take Both Doses Of COVID Vaccine By Oct-End