Did Thai Curry Come From India? 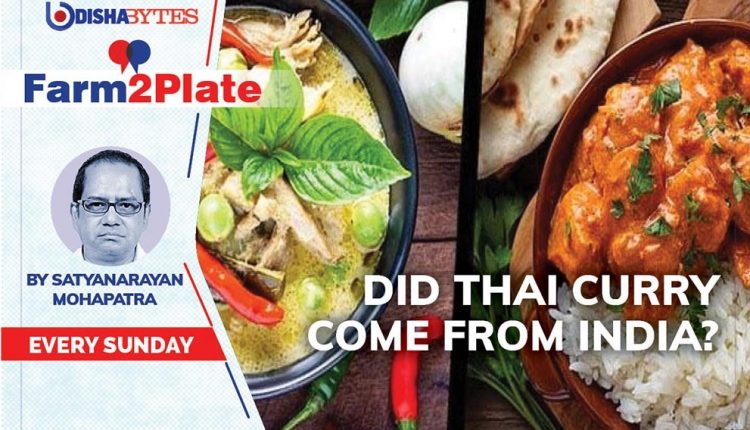 The other day I was at my favourite Chinese restaurant hogging a Thai dish made especially by the Chef. The green and red curry gravy was the Umami which was triggering the urge for more.

The name comes from the Portuguese, who used the word ‘carel’ to describe the spicy, fragrant dishes they found after arriving in India. That became ‘curry’ when the English adopted the word. As colonizers formed trade routes and colonized the globe, curry went with them. And today, you’ll find curries everywhere — from Japan to Trinidad.

Though ‘curry’ is a vastly inclusive term. What intrigued me was how the Thais got this so correctly for their dish vis-a-vis their cuisine? The question is, did they borrow it from us? If it is yes, then you may well be right. People from different culinary schools may disagree, but the south-east Asian countries do acknowledge the same: Malaysia, Indonesia and Japan, but the Thais they have their own school of thought.

The Japanese admit that the curry contribution was from India and inspired by India. For the Malaysian and the Indonesian, they don’t deny their curry base did come from India. But the Thais claim and argue that their curries are globally famous and Indian curries don’t stand up to their flavour and aroma. They developed it independently, and the English word ‘curry’ suggests a bogus kinship with their cuisine.

The Thais point out two key differences between their curries and ours. The first is that they rely on fresh herbs while our curries depend on dry spices. The second is that an essential ingredient of their curries is coconut milk. Indian curries, on the other hand, don’t usually use coconut milk but depend on dairy products like ghee, dahi.

The difference may be in the argument of spice and herbs as the Thais use spices and we use fresh leaves like dhania, curry leaves and so on. This does not stand out.

The second point, on the use of coconut milk, intrigues me. The Thais say Indian curries do not use coconut milk, they refer to north Indian food. It would be bizarre to use coconut milk in a Rogan Josh or Korma. But there’s much more to Indian cuisine than the food of north India. And once you go south of the Vindhyas, the Thai claim doesn’t hold.

Coconut is one of the mainstays of south Indian cuisine. It is used in nearly every form (flesh, oil, etc.) all over the south. In Kerala and parts of Karnataka, coconut milk is an essential ingredient in many curries.

In fact, once we compare the food of Kerala with Thai food, the distinction between Thai curries and Indian curries is extremely slender. Coconut milk curries of Kerala are fragrant, delicate and very different from the curries of north India.

The question is, did the Thais get their curries from south India? It is hard to say but we do know that the coconut appears in ancient Indian literature long before it turns up anywhere else. According to Hindu mythology, it was the creation of the sage Vishwamitra and archaeologists have found fossils all over India (including land-locked Rajasthan), which suggests that there were coconuts in India long before there were human beings.

At this stage, the theory falters. Well, may be they were missing the richness of dairy food – still this is a weak suggestion

The Portuguese came to Thailand, and they did not take a direct flight from Lisbon to Bangkok’s Suvarnabhumi airport. They got to Thailand only as part of their general exploration of the Indian Ocean, for which they used India as a base. The Portuguese ships picked and used Indian cooks from Goa and other parts of south India. It could be through this route that coconut milk curry travelled from south India to Thailand. This seems more logical.

Thus it is true that both south Indians and Thais use coconut milk in their cuisine. In Malay cuisine, there are broadly three different strengths of coconut milk, depending on thickness. The curry is made in the usual Indian way with the masala (which includes coconut flesh while grinding) being sautéed first and the thinner coconut milk being used. The thickest coconut milk goes in towards the end of the cooking process as a thickening agent.

For the Thais, however, coconut milk is the point of the curry. They begin the process by heating it till the fat begins to separate and floats to the top. Only then do they add the curry paste. The secret of a good Thai curry is to let the coconut milk cool down a little before adding the curry paste/masala.

As much as I love Malayali food, when I cook a curry at home it tends to be the Thai version. It’s not because Thai curries are necessarily better but because they are so easy to make. All you need to do is follow instructions on the back of the packet of curry paste.

It says — put coconut cream in a heated pan and add curry paste; stir fry until oil appears, add meat or vegetables or tofu and continue till done, and then add more coconut milk. Boil to cook and simmer till tender. Put potatoes and cut onion; add fish sauce, sugar, tamarind and seasoning.

Clearly, you are meant to add coconut milk in two batches, one before the masala goes in and one after. I don’t follow any such procedure and follow the granny way – mother to daughter recipe. It tastes superb and I can say with pride, ‘Hey you – copy master it is our curry and our ingredients and you have given a twist’.

Curries in England: The British East India Company had a trading post in Madras (now Chennai), so the style of curry they learned was the one native to the spices that made up the curry in Madras — usually turmeric-based. British curries are heavy in tomatoes, onions, garlic and ginger. Because of the abundance of tomatoes, curries in England are also usually redder. Caribbean curries are generally prepared with cumin, paprika, cardamom, garlic, fenugreek curry and turmeric. These are then made into a paste or powder that’s added to a protein (meat) and set to marinate before cooking or added to the oiled pan before cooking, creating popular dishes like curry goat and curry chicken. The main curry influence came with the wave of Indian immigrants who arrived in the mid-19th century. This is why curries in this region are more like traditional Indian curries. Due to the Indian influence curries are often served with roti and parantha (flat bread), potatoes, goat, lobster, chickpeas, duck, and other proteins native to the islands.

Stopping Shah Rukh Khan’s Ads: Will It Hurt Byju’s The Most?