Did The Cast Of Akshay Kumar’s ‘Sooryavanshi’ Break Police Protocol? 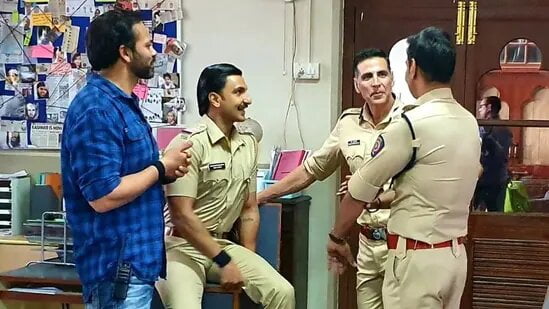 New Delhi: Akshay Kumar shared a picture on Saturday of him Ranveer Singh, Ajay Devgn and director Rohit Shetty from the sets of ‘Sooryavanshi.’

An IPS officer RK Vij pointed out an error in the behind-the-scenes picture in which Akshay, Ajay and Rohit are standing next to each other while Ranveer is sitting on a desk placed in between them. Given Ranveer’s Simmba is lower in designation as compared to Ajay’s Singham and Akshay’s Sooryavanshi, the IPS officer said an inspector wouldn’t sit like that in front of his seniors in the real world.

“The Inspector Saheb sitting while the SP stands, it doesn’t happen like this, sir,” Vij said in Hindi, retweeting Akshay’s post.

Responding to his tweet in Hindi, Akshay said, “Sir, this behind-the-scenes photo. For us actors, the moment the cameras turn on, the protocols is followed. Regards forever to our great police forces. Hope you like the film when you watch it.”

“Thank you for your response and respect you showed for the forces @akshaykumar My comment was also in a lighter vein Will definitely watch the film,” Vij replied.

Akshay had shared the picture to thank Maharashtra Chief Minister Uddhav Thackeray as he declared the reopening of theatres in the state from next month.

Akshay tweeted, “So many families would be thanking Sh Uddhav Thackeray today! Grateful for allowing the reopening of cinema halls in Maharashtra from Oct 22. Ab kisi ke roke na rukegi – AA RAHI HAI POLICE,” adding that Sooryavanshi will be a Diwali release this year. The film will clash with Marvel Studios’ Eternals.