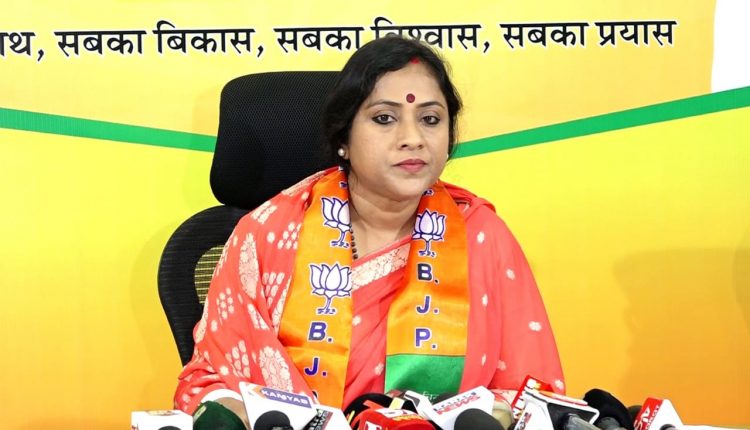 Bhubaneswar: Taking a swipe at DIG (north range) Deepak Kumar’s Saturday presser, the BJP on Sunday accused him of ‘acting’ like ruling BJD’s spokesperson and ‘shielding’ the Minister of State for Home Dibya Shankar Mishra in Mamita Meher’s murder case.

“The DIG Deepak Kumar is trying to give a clean chit to minister even when the investigation is still on. He also refuted the meeting which took place between the victim and the accused in presence of the minister at Raipur. He is not the investigating officer then how can he issue such a statement. DIG is putting pressure on his subordinate by conducting such a press meet,” Odisha BJP General Secretary Lekhasri Samantasinghar said at a presser.

The whole crime scene is being reconstructed to rebut the minister’s complicity in the case, she said, while claiming that call records have not been collected and no police team visited Raipur to investigate the allegation.

Lekhasri further said that the bag, anklet and necklace, recovered from the crime spot, were handed over to the family. “How can material evidence, which is admissible in court, be given back to the family?” she asked.

“It is shameful that a senior police officer is trying to cover up the crime and destroying evidence,” she added.

The BJP leader further questioned why the schoolteacher was abducted, murdered and the remains of the burnt body buried in the Mahaling stadium, which was being developed under the ‘Mo School’ programme. Why did police refuse to lodge their complaint and why Govind Sahu, the main accused, was detained for five days at Titlagarh barrack?

Referring to the allegation levelled against the minister by Mamita’s father, Lekhasri said he exposed the illegalities at Sunshine English Medium School. “He clearly stated that the minister sexually exploited girls at Mahaling college in Kalahandi and got Mamita killed when she opposed it,” she said.

The bereaved father had further alleged that Sahu used to run a sex racket at Mahaling College and Mishra was a regular visitor, said the BJP spokesperson.

Sahu was president of the school managing committee of Sunshine English Medium School and Anchalika (Junior) Mahavidyalaya, Mahaling, while Mamita was a teacher at the school. “He further disclosed that the victims of the sex racket were rewarded with first-class or ‘best 10’ ranks in academics,” she added.

Lekhasri said the BJP is being blamed by the ruling BJD for politicising the issue and harassing the family of the deceased while the minister is yet to be brought under the purview of the investigation despite such grave allegations against him.

The BJD countered by BJP attack by saying that the press meet exposed Lekhashree’s lack of knowledge about police investigation. “Maybe she wanted to become a Police Officer and failed. She is now trying to fulfil her childhood dream by acting as a police officer in press meets and making wild, baseless statements,” the party said in a press statement.

BJD Panelist Ipsita Sahoo further urged her to share evidence in this matter. “There is a competition among the BJP spokespersons to appear before the camera,” she said taking a job at Lekhashree.

Notably, the Odisha Congress had also lambasted the senior cop for attempting to give a clean chit to the minister during a press conference on Saturday. Besides demanding immediate arrest and removal of the minister, the party also sought a reply from BJD on a photograph of the prime accused with Chief Minister Naveen Patnaik.

The Mamita murder case has triggered a political firestorm in the state with the BJP and Congress demanding the minister’s dismissal and a CBI probe into the case. Protests by Opposition parties have spread across the state.