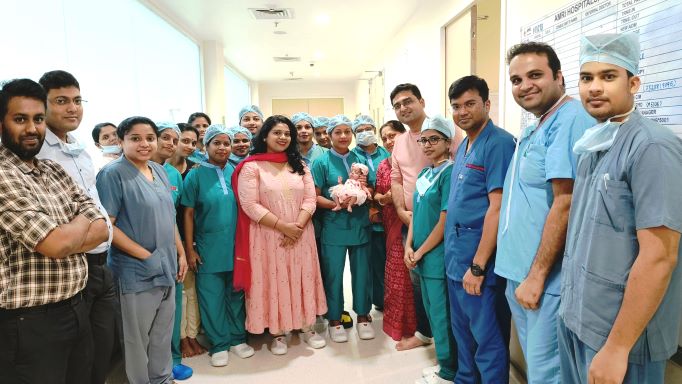 Bhubaneswar: The doctors of AMRI Hospitals in Bhubaneswar have given a new lease of life to a premature baby born after 25 weeks of pregnancy.

According to hospital sources, a woman from Puri delivered the baby girl weighing just 700 gram in 25th week of her pregnancy in June. After conceiving the baby, the parents were doing their regular checkups with Dr Monica Gupta, Gynaecolgy, AMRI Hospitals.

After the premature delivery, the parents approached the Paediatric and Neonatology department in the hospital to save the surviving neonate. The baby received a thorough treatment and care under Dr Janaki Ballav Pradhan, Dr Monica Gupta and the Neonatal ICU (NICU) team of AMRI Hospitals.

“The baby was extremely small and had all the complications of prematurity. There were many continuous challenges during the treatment. She received 3 doses of surfactant, on ventilator support for 1 month and treatment for closure of patent ductus arteriosus. After that when she developed pneumonia and sepsis, we almost lost hope, but the baby was a fighter. With the efforts of our nurses and doctors, we were able to overcome the issues. She is now healthy and neurologically normal,” said Dr Pradhan and Dr Gupta.

“Extreme prematurity with less than 26 weeks especially with birth weight of 700 gram or less rarely survive. Only a few case reports of this kind are found internationally. After a long wait and many blood transfusions, baby’s general condition improved. After 102 days, the mother was able to feed her daughter directly. The baby was discharged with weight of 2 kg. She can do normal neurological activities,” said Dr Pradhan.

“AMRI Hospitals Bhubaneswar is the most advanced hospital in eastern India to have the state-of-the-art NICU and Paediatric ICU (PICU) facilities as well as mother and childcare unit which is dealing with critically ill premature babies,” said Nilanjana Mukherjee, vice-president and unit head, AMRI Hospitals, Bhubaneswar.