Donald Trump Back On Twitter After Poll By Elon Musk 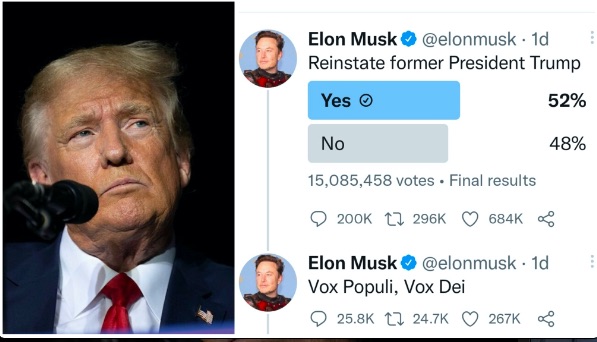 Bhubaneswar: Donald Trump, the former president of the United States, is back on Twitter.  The social media platform’s new boss Elon Musk informed on Saturday after conducting a poll in which 51.8 per cent were in favour and 48.2 per cent against the move.

“The people have spoken. Trump will be reinstated,” Muck tweeted. He also used the Latin phrase, “Vox Populi, Vox Dei”, which literally translates as “the voice of the people is the voice of God”.

In 2021, the social media platform suspended @realDonaldTrump account “due to the risk of further incitement of violence” following the January 6 Capitol Hill riots. Similar action was taken for his Facebook page.