Dungar Jatra: A Unique Festival At Hilltop Shrine In Odisha 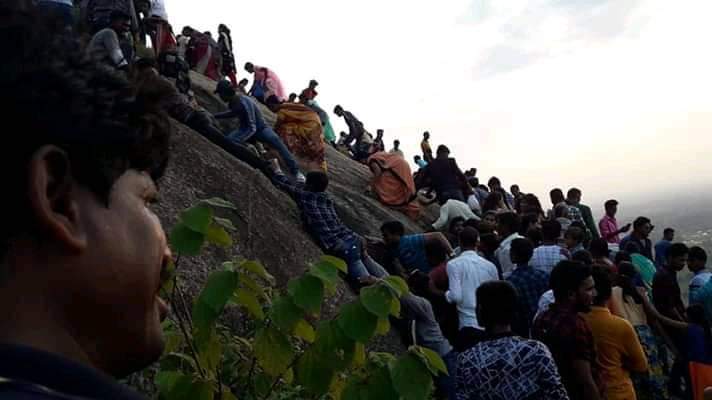 The influence of Sanatan Hindu Dharma on folk culture and beliefs has seen the establishment of many Shakti Peethas (shrines) over the ages.

One such Shakti Peetha is located atop Chudakhai Dungar (hill) in Odisha’s Subarnapur district. For decades now, annual fairs are held at Chudakhai, around 7 km from Tarabha town, on various occasions and festivals.

One of the oldest and most prominent of festivals is ‘Dungar Jatra’, which begins on Ashwina Shukla Ekadasi and ends on Purnima (this particular Full Moon is also celebrated as Kumar Purnami is other parts of Odisha).

According to the elderly people of the region, the ‘Dungar Jatra’ fair at Chudakhai was first held some 250 years ago. But it was only in March this year that the Odisha government’s Tourism Department granted recognition to Chudakhai Dungar as Odisha’s 358th tourist destination. Following this official tag, it was decided to celebrate Dungar Jatra as ‘Chudakhai Dungar Loka Mahotshav’ from this year onwards.

The main attraction of the annual Dungar Jatra are the deities in a cave on top of Chudakhai hill, hence its popularity as a Shakti Peetha. Chudakhai means “a woman who eats rice flakes”. Hence, the deities are offered chuda as bhog (offering of rice flakes), giving the name to the hill.

Most people believe that the goddesses being worshipped at the Chudakhai shrine are three in number, but there are in fact five deities. Three inside the cave—Swargaasani, Puda Patto and Siger Patto—and two outside—Bautti and Khulenbuti.

According to Durjyadhan Sahu and Gurandar Jhankar, elderly residents of Kutasira at the foothills of Chudakhai, the three deities inside the cave are none other than Balabhadra, Subhadra and Jagannath (the presiding deities of Odisha) and Mahalaxmi and Sudarshan are the deities worshipped outside the cave.

As per folk beliefs, Goddess Chudakhai had prohibited the Barua and Jhankar tribes from going to Puri to pray to the sibling deities there. She ordained that worshipping at the shrine atop the hill will bear the same fruit as making a pilgrimage to Puri.

According to the former sarpanch of Kutasira, Durjyadhan Sahu, the deities worshipped atop Chudakhai once resided at Srikhetra. They then appeared as three rocks on the banks of Tel River in Kantamal block in Boudh district.

After getting news of the rock deities from the people, the zamindar of Kamghat invited his counterparts from Kamsaraa, Aattho Gaan, Sarbapalli, Maradugochha, Kutasira, Tulanda, Jharmunda and Khuntabandha for a meeting. The zamindars decided that the deities will be installed at a specific place and worshipped there.

In fact, Chudakhai Jatra officially begins after ‘Paato Buka’ from the house of Kamghat zamindar and ‘Paato Sindoor’ from Kamsaraa zamindar is offered to the deities. Based on tribal culture, the Chudakhai Dungar Jatra is celebrated for peace, amity, goodwill and cohabitation among the people of the region.

(The article is based on information given by Pankaj Kumar Sahu of Tarabha, Subarnapur district.)