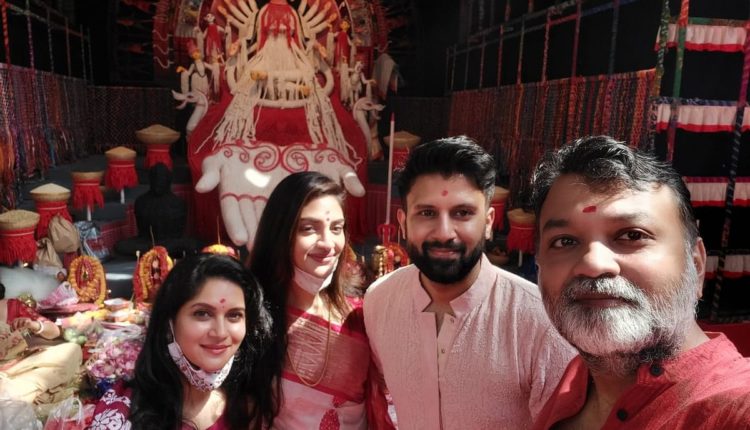 Kolkata: Trinamool Congress MP and actress Nusrat Jahan has been accused of contempt of court for defying a Calcutta High Court order and visiting a Durga Puja pandal.

Advocate Sabyasachi Chatterjee, representing a petitioner who sought restrictions during Durga Puja to prevent a surge in coronavirus cases, said the case will soon be heard by a vacation bench of the court, reported India Today.

“It was astonishing that people’s representatives like Nusrat Jahan and Mahua Moitra entered pandals despite the court prohibiting it by declaring pandals as no-entry zones. MPs, lawmakers entering pandals in complete violation of the High Court judgment is a clear contempt of the court,” Chatterjee was quoted as saying.

“It is also contempt of the particular position they are holding. She has misused her position as an MP to enter the pandal. Notices have been dispatched… Nusrat Jahan and Srijit Mukherji should receive it by tomorrow,” he added.

Actor-politician Nusrat Jahan and her businessman husband Nikhil Jain, along with filmmaker Srijit Mukherjee and his wife, Bangladeshi actor Rafiath Rashid Mithila, were spotted at a pandal in south Kolkata on October 24.

“If this is the attitude of celebrities in the state, then what will the public think? Even Union minister Babul Supriyo was at the puja pandal at EZCC. If court orders are being violated in such a fashion, then there will be no protection for the rule of law. We are receiving and collating such information and will bring all of them to the notice of the court,” the advocate further said.

A division bench of Calcutta HC had, on October 19, ruled that none other than 15-25 designated puja organizing committee members will be allowed entry into puja pandals.