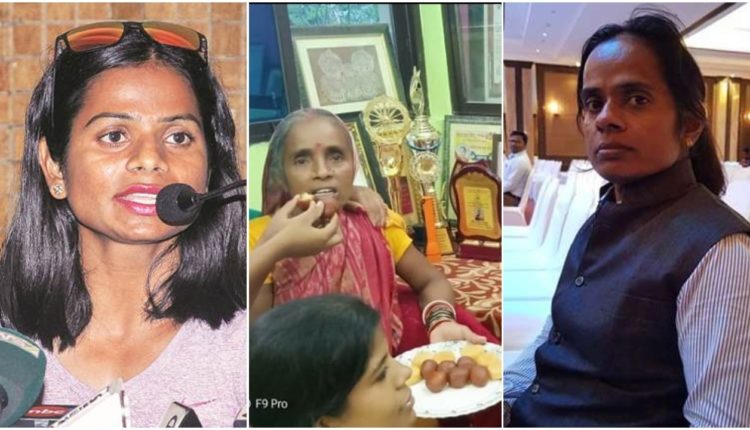 Bhubaneswar: India’s ace athlete Dutee Chand has turned the tables on her sister Saraswati, a state-level athlete who had opposed her (Dutee’s) same-sex relationship, saying that the elder sibling has herself been involved in a similar relationship since 2017.

Dutee alleged that her sister wielded authority in the family and managed to ostracise her (Dutee) after she came out in the open about her same-sex relationship in 2019. However, she (elder sister) herself continued to be in a relationship with her girlfriend, and no one in the family, including her parents, dared to oppose her.

“My eldest sister has been in a same-sex relationship with a girl from Assam for the last five/six years. She had been staying with that girl in our home on the pretext of providing her training and claiming she is her student,” Dutee said, speaking exclusively to Odisha Bytes.

Dutee said that her sister used to go to Kolkata to meet the girl and then both came to stay in the Bhubaneswar house where Dutee stays. This arrangement went on till 2018. After that, Dutee’s sister took her partner to their new home in the village and the two have been staying there along with her parents.

Dutee has not gone home since 2019. “I spent Rs 70 lakh to build a new house in our village for my parents, but my sister and her partner are staying there while I have been hounded out,” said the athlete.

When she went to her village during Raja festival, her sister didn’t allow her parents to meet her and Dutee had to return to Bhubaneswar disappointed, she revealed.

“My sister wants money from me… when I refuse, she often abuses and physically and mentally tortures me. And now, after I got a house constructed for my parents, she wants to capture it by threatening us,” alleged Dutee, who had lodged a police complaint against Saraswati in Bhubaneswar two years ago for physical and mental torture.

“My parents had objected to her relationship, but subsequently they chose to remain silent as she abuses and threatens them too,” said Dutee.

Saraswati, who is 38, continues to dodge any conversation on marriage. “She told my mother she wouldn’t get married and will live here forever,” Dutee said.

It may be recalled that Saraswati was quite vocal in opposing Dutee’s same-sex relationship in 2019. “She is being misguided by some people, including parents of the girl, who want to grab her money and property,” Saraswati had publicly claimed.

Also Read: Odia Athlete Dutee Urges Those In Same-Sex Relationships To Be Courageous, Like Her

Saraswati rubbished Dutee’s allegations and termed it as a conspiracy against her family. “There is no truth in what Dutee has said. It will be better if she (Dutee) focuses more on her sport instead of speaking rubbish to the media”.

Asked whether that girl was staying in her house, Saraswati replied in affirmation, but dismissed Dutee’s allegations as false and preposterous. “As an elder sister, I always want and pray for Dutee’s success in her sporting career. I want her to win medals in the Olympics.”

Saraswati further said that she spotted that girl during a training programme in Assam and found her immensely talented. “After I came to know that her family is not financially sound to support her training cost, I offered to help her. She has been staying in our home since 2018 and practising with me every day,” explained Saraswati, who is a sub-inspector with Odisha Police.

She also said that the media is biased against them. “As Dutee is famous and has money power, media highlights whatever she says against us. But only my family knows the truth and one day everyone will know it.”

Their mother Akhuji also bluntly denied the allegations against her eldest daughter.

“For the last one year, Dutee has not been treating us well and not giving us a single penny. She was misguided and influenced by some people in our village as they wanted to grab her wealth and money,” she said.

“As her mother, I continue to pray for her well-being and success in her career. I will say everything after she gets the Arjuna Award. Till then, I will not open my mouth,” Dutee’s mother concluded.