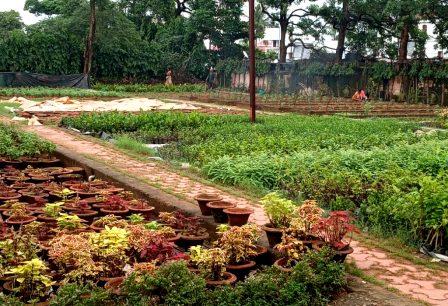 Bhubaneswar: Amid protests by opposition Congress and BJP against the alleged takeover of Ekamra Kanan by the Horticulture Department, the Odisha government has clarified that the news published in some section of the media is not based on facts.

In a release, Chief Secretary Asit Tripathy said that that the Ekamra Kanan is a place of pride in Bhubaneswar and the government is committed to improve it further. “The government attaches the highest importance to the Regional Plant Resources Centre (RPRC) functioning in the Ekamra Kanan with its wide-ranging activities in biotechnological research. The place will be kept up and maintained as a public place of importance,” he added.

He also said that the Horticulture Department has surrendered some of its unused land lying vacant for the five decades in Jayadev Vihar and Paika Nagar mouzas for more productive use. The surrendered land is in no way related to the Ekamra Kanan land.

Meanwhile, the BJP activists staged a demonstration in front of the main gate of Ekamra Kanan on Wednesday.

Talking to mediapersons, BJP state spokesperson Dilip Mohanty said that when the world is deeply concerned over the acute environmental pollution,  a group of bureaucrats with vested interests has planned to destroy the rich biodiversity of Ekamra Kanan situated in the heart of the city by cutting thousands of trees that are more than 40 years and sell them to private parties. “We will stage Satyagraha in front of the Naveen Nivas if an attempt is made to cut any one tree inside Ekamra Kanan,” he maintained.

Condemning the move, Mohanty urged the Chief Minister and the Chief Secretary to urgently intervene in the matter and initiate stern action against these tainted officials and arrest them forthwith.