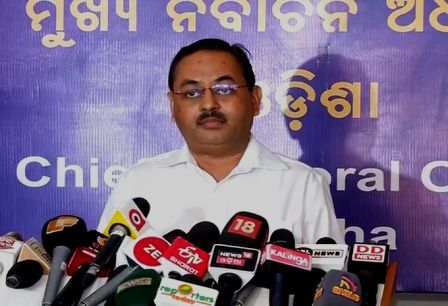 Bhubaneswar: The special campaign for electoral roll revision by Election Commission of India (ECI) will start in Odisha from November 9.

This was revealed by Chief Electoral Officer Sushil Kumar Lohani on Friday during a review meeting with district collectors and sub-collectors regarding preparedness for conduct of the special campaign. Explaining the officers, Lohani informed that the Commission has made provision for collection of advance application from prospective Electors (17+ years).

Earlier there were one qualifying date on January 1 of every year for which youths of above 18 years had to wait for one year for enrolling themselves in the electoral roll. But from this year, the provision has been made for four qualifying dates starting with each quarter of the year i.e. January 1, April 1, July 1 and October 1. He further informed that during this campaign period, all the applicants who are going to qualify till October 1, 2023 can apply in advance.

Stating that Odisha has made good progress in online enrolment of electors with “Voter Helpline” app by the citizen independently and GARUDA app by the booth level officers, he said citizens can use Voter Helpline app or visit nvsp.in for online application.

The Commission is also encouraging voluntary linking of Aadhaar number with the EPIC (Voter Card Number) which will facilitate filtering the duplicates and make the voter list error free. Odisha is among the top states in the country in achieving the goal of linking EPIC with Aadhaar as more than 77% of the voters in the state have already linked their Aadhaar. The rest can do this during this revision period.

During the revision period, special campaign will be done on November 12-13 and November 26-27 when BLOs will be available in the respective polling stations to facilitate the voters.

Senior officers have been appointed as Roll Observers who will also visit the assigned districts during the revision exercise to oversee the process.

The Chief Electoral Officer informed that best performing booth level officers, sub-collectors, other electoral officers and even the district collectors will be awarded during the next National Voters Day function to be held on January 25, 2023.