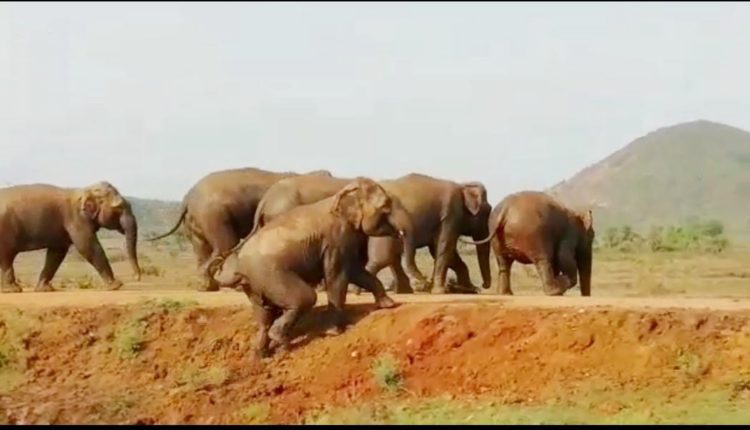 Berhampur: A herd of 12 elephants that had strayed into Digapahandi block and damaged paddy crops on large areas in several villages of Odisha’s Ganjam district, was spotted near Sishu Mandir school building in the area on Sunday night. They had crossed the main road near Ghodahada Dam on Sunday night.

However, Forest Department staff acted fast and warded them off from the area by beating drums and flashing light. There was no damage to the school building.

The herd comprises a tusker, five adult females and six calves. The herd had strayed into the area from Ghumusar forest and are camping in the forest adjoining Kerandimala hills including tribal dominated Gudari, Biribadia, Mareibadi, Sana Buruda and Chadheyagarada under Basudevpur and B Turubudi panchayat in Digapahandi block from Monday morning.

Meanwhile, Prasant Kumar Patnaik, Assistant Engineer, Electrical division, said they are ready to help Forest personals to tackle the situation. “If the pachyderms move to human habitation, we are ready to cut-off electricity supply and prevent electrocution,” he said.

COVID-19: This Odisha District Bans Entry Of Outsiders To…

Govt Aid For Couple Who Mortgaged Infant For Treatment In…