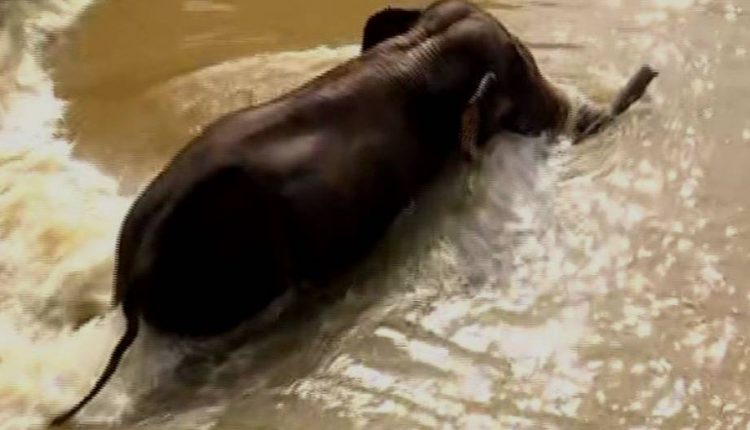 Cuttack: The tusker, whose rescue operation in flood water of Mahanadi led to boat mishap causing death of a journalist on Saturday, remained untraced on Saturday.

After the elephant was spotted trapped in flood water near Mundali barrage in Cuttack on Friday, the Fire personnel had made efforts for several hours to rescue it. Though the operation continued till night, the Fire personnel did not succeed in their efforts. On Saturday morning, the tusker was not found at the barrage.

As informed by Forest Ranger of Athagarh Aisha Akhtar Nisha, the elephant might have been swept away towards the downstream of Mundali barrage.

The Fire personnel and ODRAF teams have started rescue operation at different locations of the Mahanadi including the downstream. The operation was going on till the report was filed.

The wildlife experts pointed out that the elephant could not be rescued due to the strong current of water and said it might have been scared by a large gathering of people on the bridge to witness the rescue operation.

They also wondered as to why the NDRF team was not called for the rescue operation as the elephant was stuck under the bridge for a long time.

It may be mentioned that a herd of 17 elephants including four tuskers, nine females and four cubs from Chandaka Wildlife Sanctuary had entered Athagarh Forest Range in the early morning of Thursday. Later, the herd was found moving in Sukashan reserve forest near Rajnagar village and a cashew forest in Kandarpur.

While the herd was crossing the river bank at night, six elephants went towards Nuasasan forest in Athagarh and two towards Anantpur. Eight of them stayed at Sanamundali while one tusker leading the herd was swept away by the swirling floodwater towards Mundali barrage and got stuck there at about 4 am on Friday.

Following information, a team of Forest staff and Fire personnel rushed to the barrage and tried to bring the tusker to the bank by offering it bananas. But it could not come to the bank as it was exhausted.

On being informed, a 10-member ODRAF team arrived at the Mundali barrage at 11 am to launch the rescue operation.

Later, seven members including five ODRAF personnel, chief reporter of OTV Arindam Das and cameraman Prabhat Sinha went to the elephant in a powerboat. As the team tried to drive the elephant from its backside, the boat overturned due to the strong water current.

While four ODRAF jawans and the cameraman managed to escape with the help of a rope ladder thrown by the ODRAF jawans from the Mundali bridge, one jawan and Arindam drowned.