Embassy Advises Indians To Leave War-Ravaged Ukraine ‘At The Earliest’

Kyiv: The Indian embassy in Ukraine issued another advisory for its citizens on Wednesday.

This time, the embassy has urged Indians not to travel to the war-ravaged country and advised Indians in Ukraine to leave the country at the earliest.

“In view of the deteriorating security situation and recent escalation of hostilities across Ukraine, Indian nationals are advised against travelling to Ukraine. Indian citizens, including students, in Ukraine advised to leave Ukraine at earliest,” the embassy stated. 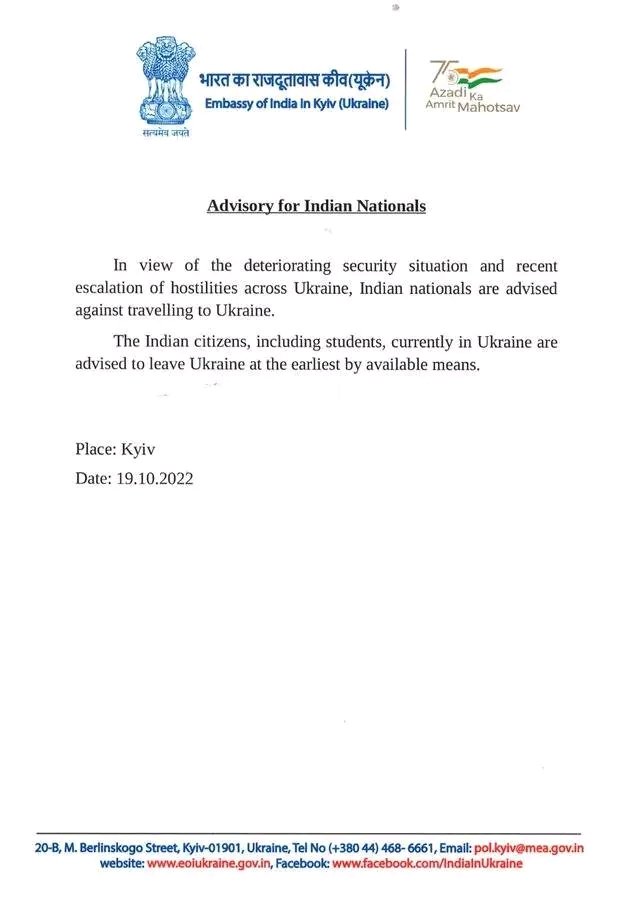 On October 10, the Indian embassy had advised Indian nationals to avoid all non-essential travel to and from Ukraine.

Martial law, under Russian legislation, could lead to ban on public gatherings, travel bans and curfews, and censorship.

Following an escalation of hostilities in the Russia-Ukraine conflict earlier this month, the Indian government had expressed its deep concerned.

“We reiterate that escalation of hostilities is in no one’s interest. We urge immediate cessation of hostilities and the urgent return to the path of diplomacy and dialogue. India stands ready to support all such efforts aimed at de-escalation,” the Ministry of External Affairs had stated.