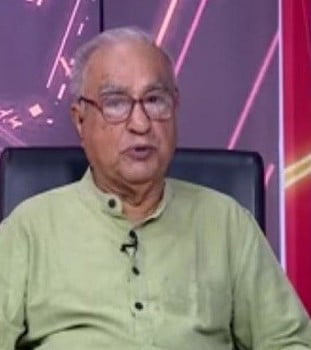 Bhubaneswar: Eminent litterateur Rajat Kar passed away in a private hospital in the city on Sunday. He was 88.

Kar complained of feeling uneasy at his home in the evening and his family rushed him to the hospital. But doctors of the hospital declared him dead. He had suffered a massive heart attack, said his son Ranjit Kar.

A prolific writer, Kar was known for his contribution to Upendra Bhanja literature. He wrote around 7 non-fiction books and several books on Jagannath culture.

A Padma Shri awardee, Kar was also a reputed commentator in radio and TV channels during Rath Yatra in Puri. He holds the record of being the longest and oldest commentator of the Rath Yatra for 62 years.

Kar was conferred Padma Shri for his contribution to literature and education in 2021.