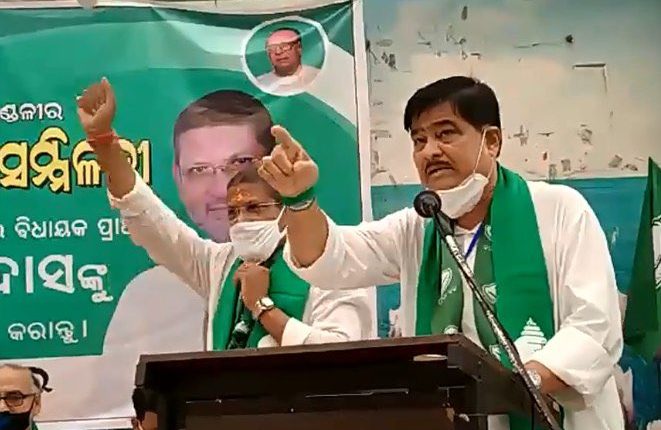 Balasore: Odisha Minister and BJD leader Ranendra Pratap Swain’s comments that Balasore bypoll was a godsend opportunity for the people of the constituency to get back on the development track left BJP candidate Manas Dutta in tears.

Manas is the son of Madan Mohan Dutta, whose death led to the by-election. “I am deeply saddened by the comments of the minister. Instead of being sad over the tragic demise of a fellow legislator, they take it as an opportunity to wrest back the seat,” he said.

Aware of the sympathy wave for Manas and how emotional cards are played out during elections, Swain tried to assuage the situation by issuing a clarification.

The BJD leader asserted that he shared an excellent relation Madan Mohan Dutta.

“I never called his demise as an opportunity for BJD to win back the seat. I consider his son Manas Dutta as my son. My comment was twisted and blown out of proportion,” he tweeted.

I am deeply saddened by the turn of events and my statement is being blown out of proportion. I have nothing but the deepest respect and admiration for Shri Madan Mohan Dutta. Manas is like my son and if he is hurt, then I am deeply saddened. (2/2)

He further said that he had the deepest respect and admiration for Madan Mohan Dutta. “If he (Manas) is hurt then I am deeply saddened,” he added.

The trouble for the minister did not end here. BJP leader Lekhashree Samantsinghar moved the State Election Commission alleging violation of poll code of conduct by Swain while addressing Biju Chhatra Sammilani with more than 1000 people inside a closed hall.

Odisha Prods Centre On Release Of Pending Subsidy For Paddy…