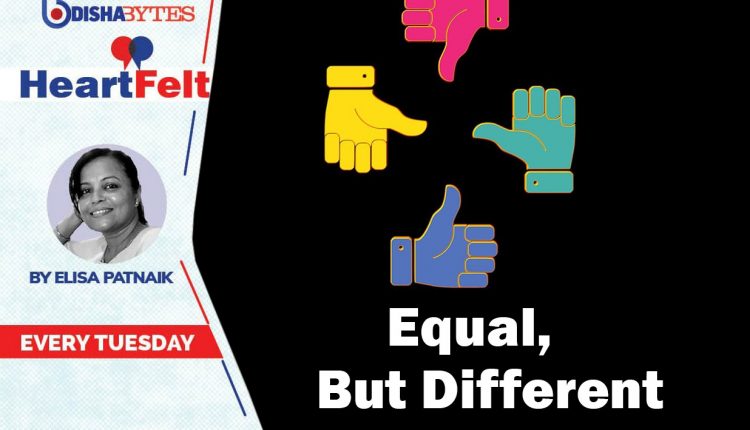 I am often asked by male friends, family members and colleagues if we consider men and women equal, why do we have reservations, special consideration, flexibility and ‘extra’ benefits for women? It’s tiring and disappointing responding to such queries. I was under the impression that the answer was obvious, at least to the so-called educated, progressive and modern men. But clearly, it’s not.

Women are often questioned about their alleged ‘privileges’ and ‘entitlements’ – seats reserved in public transports, separate queues in public spaces and of course political reservation. Some men even bandy about women ‘wanting equality’ but not doing ‘equal work’ and enjoying special facilities denied to them. People usually tend to object to anything that makes concessions for women – even if it creates space for more equitable conversations, paves way for an equitable world and results in larger good.

Gender equality for many means that both men and women have to be treated equally. Or rather, for women to enjoy equality, they have to agree to be treated like men. The age-old discriminations, continuing inequities and disparate treatment be damned.

Yes, we are equal. But different too. And the wisdom lies in recognising and understanding these distinctions – gender, biological and physical – and bearing them in mind while dealing with both men and women in personal and professional spaces.

And to do so, we also need to understand the difference between gender equality and gender equity. Gender equality means equal rights, responsibilities and opportunities for women and men and not discriminating basis their sex. Equality does not mean that women and men will become the same, but rather that women’s and men’s rights, responsibilities and opportunities are not based on whether they are born male or female.

Here, the interests, needs and priorities of both women and men are taken into consideration, and the diversity of different groups of women and men is recognized and acknowledged. Gender inequality exists when women, men and other genders are excluded or disadvantaged in relation to decision-making, opportunities, expectations and access to economic and social resources.

Gender equality does not mean that men and women become the same. And gender equality is not a women’s issue only but also concerns and engages men as well as women.

Gender equity, on the other hand, is how we ensure fairness to women, men and other genders. To compensate for historical and social disadvantages that prevent women and men from otherwise operating on a level playing field, special strategies and measures are made available so that they get the opportunity to mitigate those disadvantages. Recognising these differences, and ensuring equity by giving special opportunities which will ultimately lead to equality.

When it comes to economic participation of women, although there have been many changes in the past decades with women moving into paid employment outside the home and enjoying more choice and independence, the progress in education is not matched by higher labour force participation.

Despite a growing number of women acquiring professional degrees, they remain under-represented and almost invisible when it comes to senior leadership positions and decision-making roles professionally. They are low paid too, as compared to their male counterparts. Additionally, women who are in powerful positions often find they face a daily barrage of sexist behaviour from men.

Women’s marital life, child rearing and other domestic responsibilities often affect their career growth. A majority of women aged 30-40 see their income either remaining stagnant or declining when they have children and have additional nurturing duties. Several women drop out of careers.

Women easily move to a different city on their spouses’ job transfers, take leave automatically when their child is sick, forgo promotions, and limit their work travels little understanding the consequences it would have on their career growth. Women’s careers are treated like dispensable jobs irrespective of how much they earn. There is an unconscious bias that women’s career is second to men’s and when needed can be sacrificed. No eyebrows are raised when women put up their papers during a family crisis.

Like women, men too are influenced by gender norms. Societal norms along with notions of masculinity and expectations of men as natural leaders and breadwinners shape their behaviour. Men are often expected to look after the material needs and comforts of their families while women are expected to take up the nurturing and caring roles.

Thus, while women have proved beyond doubt that they are equally talented, efficient and capable as men, they are still held back by family and social expectations. They are not only judged for having personal and professional ambitions but also discouraged from reaching them.

Similarly, from toilets, and safety to enabling environment – workspaces often ignore the needs and challenges of women. Sometimes, they are even considered unprofessional or not committed enough for availing maternity or pregnancy-related leaves. In fact, when a corporate introduced period leaves for women, it set in motion conversations about how this is unfair to men.

A refreshing read was author Anita Bhogle’s recent book ‘Equal, Yet Different’ which talks about how men and women are different in terms of the way they are wired, their conditioning, and also their requirements although they may be equal in terms of ability and ambition. The book focuses on professionally qualified women who have worked hard to earn that degree but have different requirements. Based on in-depth interviews with career women, leaders and experts on Diversity, Equity and Inclusion (DEI), the book identifies catalysts that can help women achieve maximum potential and fulfilment.

However, Bhogle points out that the reasons for women not making it to the top echelons of the business world extend far beyond the known ones like marriage and maternity. There are many conscious and unconscious mindsets that manifest at home and in the workplace, which continue to hold women back, she reasons.

Unfortunately, besides grappling with external challenges, women find that their own mindsets are also shaped by such conditioning. There is so much social conditioning about a woman’s primary responsibility being a family and home that a large majority of women still are not ambitious enough, and don’t mind sacrificing their dreams and aspirations.

Bhogle says that people within a team in the workplace have different needs and different temperaments and they respond to things differently. So while there are the non-negotiables, like discipline and hard work and integrity, the rest could be given some flexibility. Equal yet different really means that women want some flexibility on the input, but no concessions on the output, she says.

Professional women are equal to men in terms of their ability and their ambition and yet one finds that many do not make it to leadership positions and decision-making roles. It is only because their challenges are different, and they are wired differently and organisations must realise this, she remarks.

She suggests adopting a gender-neutral or gender-just approach where the employers create different opportunities for women because it is something that traditionally they’ve lacked within the office and externally. Giving examples of how organisations can’t differentiate between competence and confidence, she says when a woman doesn’t speak up, it is mistaken for lack of competence. Leaders should understand that women are wired differently, they respond to feedback differently, and they think of success differently. Women themselves need to work on important skills and figure out what’s keeping them away from leadership positions, she advises.

The Equal but Different approach cuts across sectors where, rather than limiting women because of such differences and gendered perceptions, there needs to be a gender-friendly and enabling environment to encourage their participation. For example, many reasons are cited justifying why women joining the forces should not be moving into combat roles. Among the reasons named are low acceptance of women in leadership roles among male soldiers, vulnerability of women soldiers to sexual harassment, physical fitness limitations, lack of infrastructure such as separate sleeping arrangements and toilets. Not to mention the impact of long maternity leaves, child rearing etc.

So, do we exclude women because they are different or make space for them to enter, flourish and be equals? It’s time to seriously adopt an Equal but Different approach.