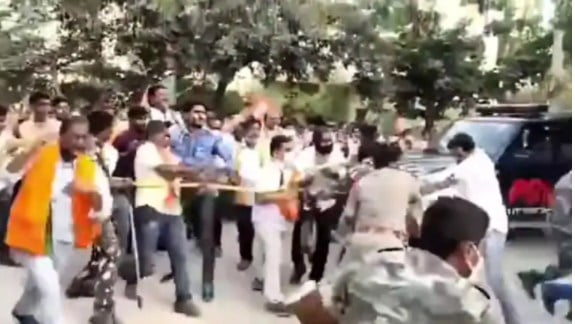 Kolkata: Ahead of Assembly elections, campaigning often turns into intense situations. A video showing BJP workers breaking a police cordon and pelting stones at a house has gone viral on social media. It claims that the party is disturbing peace in West Bengal.

“If farmers are rioting in Delhi, then is BJP trying to maintain peace in Bengal?” is one of the comments on the video.

However, the video is not from West Bengal but Telangana. On January 31, BJP workers had attacked the house of Warangal TRS MLA Challa Dharma Reddy for his remarks on Ram Mandir donation drive.

One of the police vehicles in the video has “Warangal Police” written on it.

At the time, 39 BJP workers were arrested for attacking the residence of the MLA in Warangal, Telangana.

Bhubaneswar, Here’s How You Can Apply For Trade Licence Online; Ward Numbers…