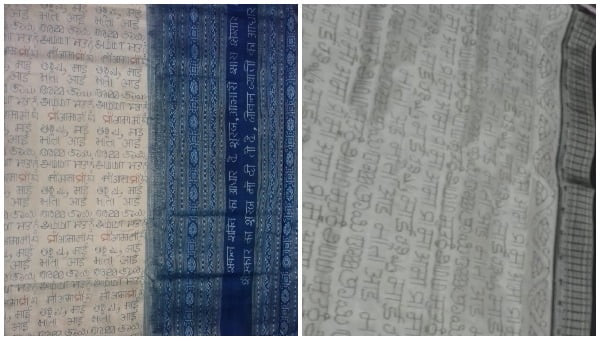 Bhubaneswar: The creation of ‘Maa’, the creator herself, snowballed into a major controversy in Odisha on Tuesday. Here we are talking about a Sambalpuri bandha saree, which grabbed the headlines after a weaver accused a businessman, who owns Rajesh Meher Sambalpuri Saree Centre at Sonepur town, of hijacking his hard work and using it as a marketing gimmick to push his sale.

Amid contradicting media reports and videos circulating on social media, Odisha Bytes spoke to the parties concerned to know the truth behind the controversy and the story behind the saree.

The news in some sections of media, praising Rabi Kishore Meher and his design skills, came as a shock for Biswanath Meher, a national award-winning weaver of Tikarapada under Subalaya gram panchayat in Sonepur district. “Misleading and cheap,” he said.

Narrating his journey with the ‘Maa’ saree, he said it was the upshot of his wish to win a national award after the state award in 2012-13. He approached Prafulla Meher, a weaver who currently works as a supervisor at Director of Textiles’ regional office in Sambalpur, for a novel design that can win the hearts of the jury members.

Prafulla was then posted at Sonepur; in the past he had helped weavers pick interesting designs and colours to enhance the look and feel of a product. 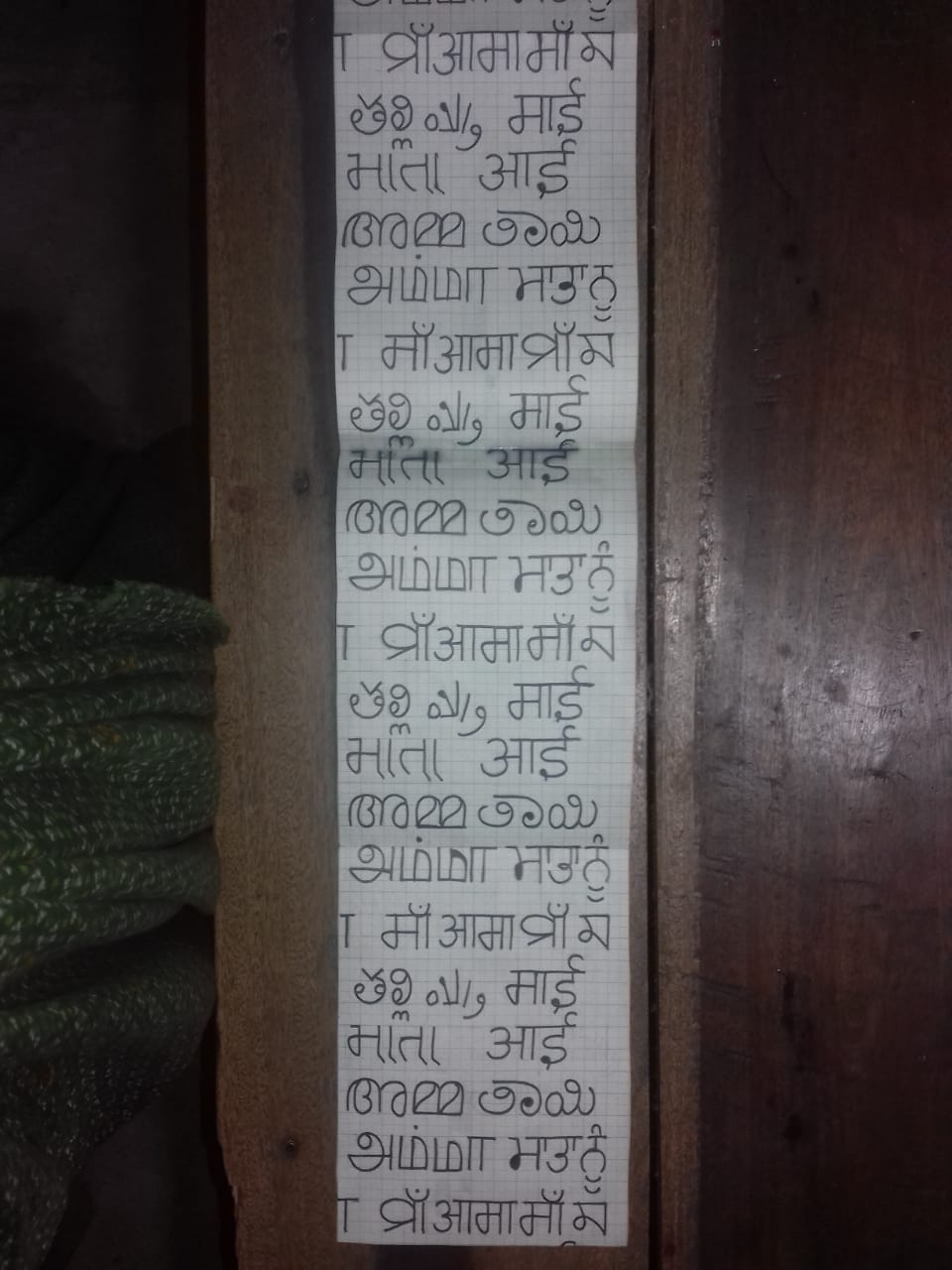 “He came up with the idea of ‘Maa’ weaved into a saree in different languages of India as a tribute to women. He gave me a graph with 13 languages and I began working on my loom,” he said.

It took Biswanath almost two-and-a-half month to weave the first piece of art. “It was in late 2014 or early 2015. My father Rasananda Meher, a relative and Shankar Meher helped me create the bandh, which was then dyed. I applied for the award through the Assistant Director of Textiles office in Sonepur and the saree was then sent to Delhi via Weavers’ Service Centre, Guwahati,” he said. 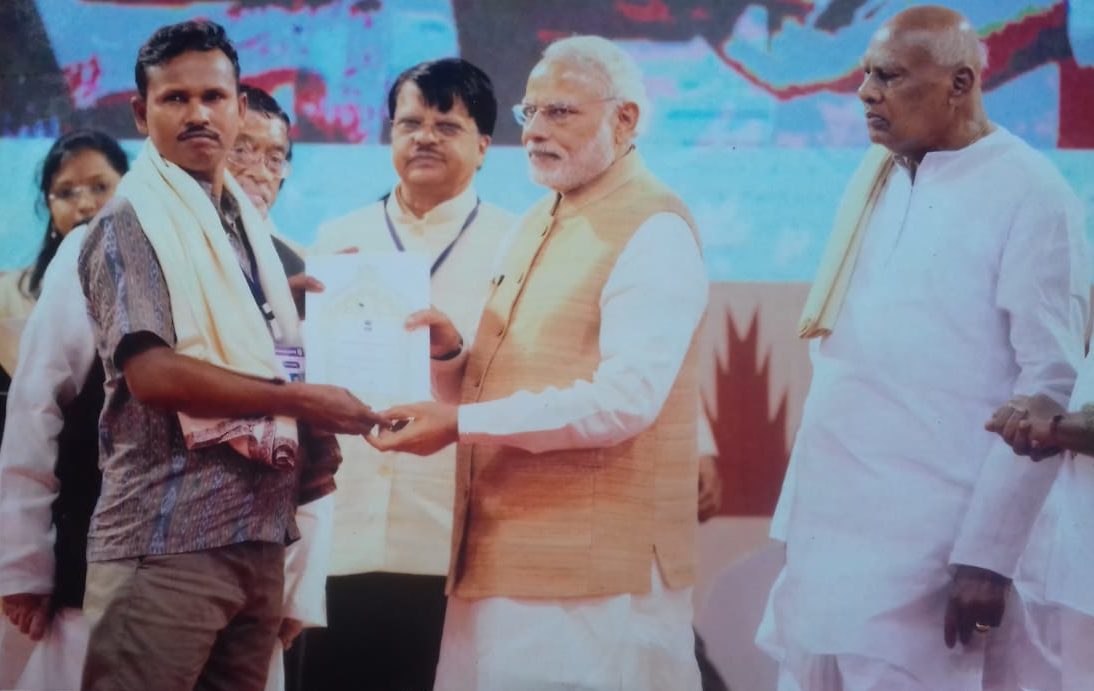 Since then, he has sold around 100 ‘Maa’ sarees across Odisha.

But now he sees a saazish (conspiracy) to rob him of his hard work and self-respect. “It feels bad when someone makes a claim to your craft,” he added. 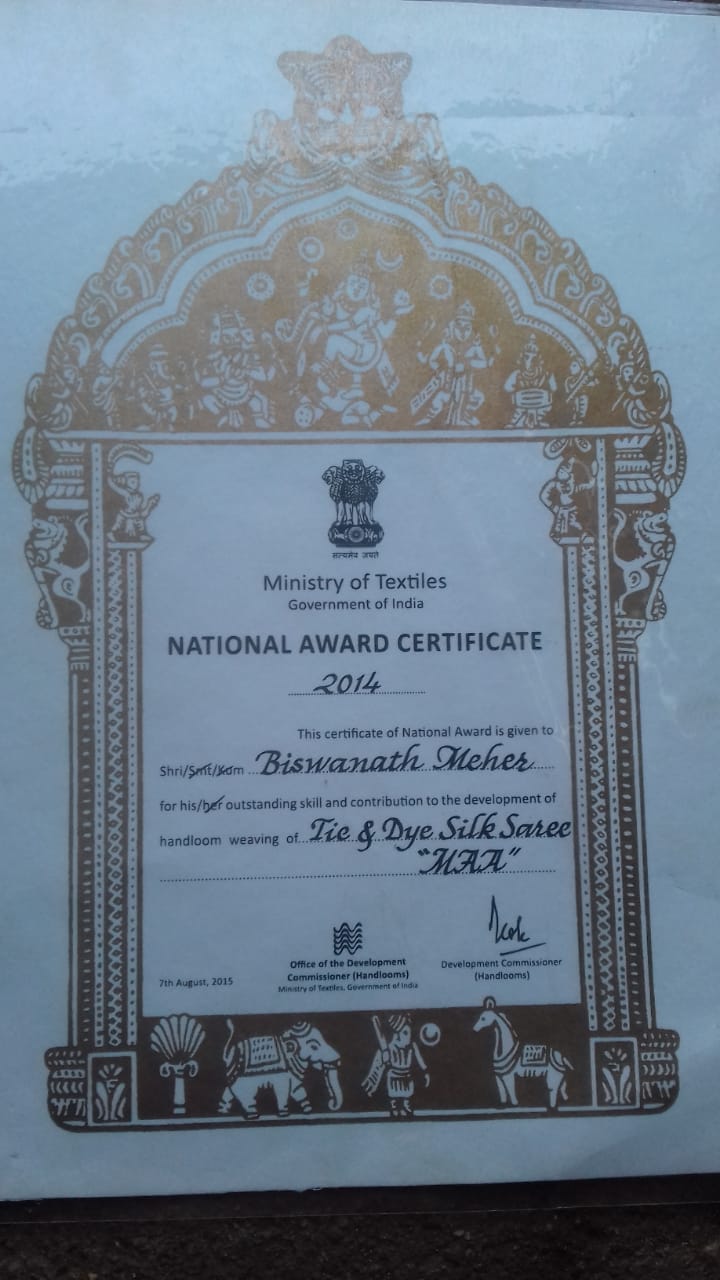 The story behind ‘Maa’ saree, however, did not begin in 2014. “In 1993-94, I had weaved two sarees in black with ‘Maa’ sprouting out of a lotus on the anchal. However, it did not get the award then. The Weavers’ Service Centre bought one of those sarees and the other, I donated at a Sanatan Satsang in Deogarh,” said Prafulla, who won the National Merit in 1991-92.

A girl wore the saree and it was highly appreciated by people there. “I had then thought of weaving ‘Maa’ in other languages. The following year, government employees were banned from participating in the competition and the idea was pushed to the backburner,” he said.

Biswanath’s wish rekindled the hope to make it happen again. “I took the help of my daughter and she could get me the word written in 13 languages. It was then composed and the graph was prepared in 10 to 15 days,” he said.

Prafulla said that Sanjay Panda, the then Secretary in Ministry of Textiles, had recounted the reaction of the jury members when Biswanath’s ‘Maa’ saree was presented to them. “They all blurted out ‘Maa’ in unison having found the word in their own language. The weave had weaved its magic!” he added.

Rabi not only staked claim to this special design, which he supposedly created with his brothers during the second wave of the pandemic to woo saree lovers back to his shop as the COVID-induced lockdown had badly hit business, but also the ‘Shri Ganeet’ saree which Vidya Balan wore during the promotion of her biopic ‘Shankuntala Devi’ last year. “The original saree was in black. We added a pink border and anchal to it. Vidya Balan had worn our saree during the promotion,” he said.

He also claimed to have hand-woven a spectacular creation for former Miss World and Bollywood actor Aishwarya Rai Bachchan. “We keep innovating and coming up with new designs. We are currently working on Yoga, Dhanteraas and Maa Laxmi sarees,” he said, adding the ‘Maa’ saree is priced at Rs 20,000.

Prafulla, however, said Chaturbhuj Meher, a master weaver of the Tie-dye handloom tradition, had created the richly-crafted tissue saree for Aishwarya, which she wore on her wedding day.

He further questioned Rabi for continuing with the 13 languages in the ‘Maa’ version of his saree. “He should have been gracious enough to accept that the weaves were inspired by that of Biswanath’s, whom he no longer recognises despite having bought sarees from him for his showroom,” he said sarcastically. 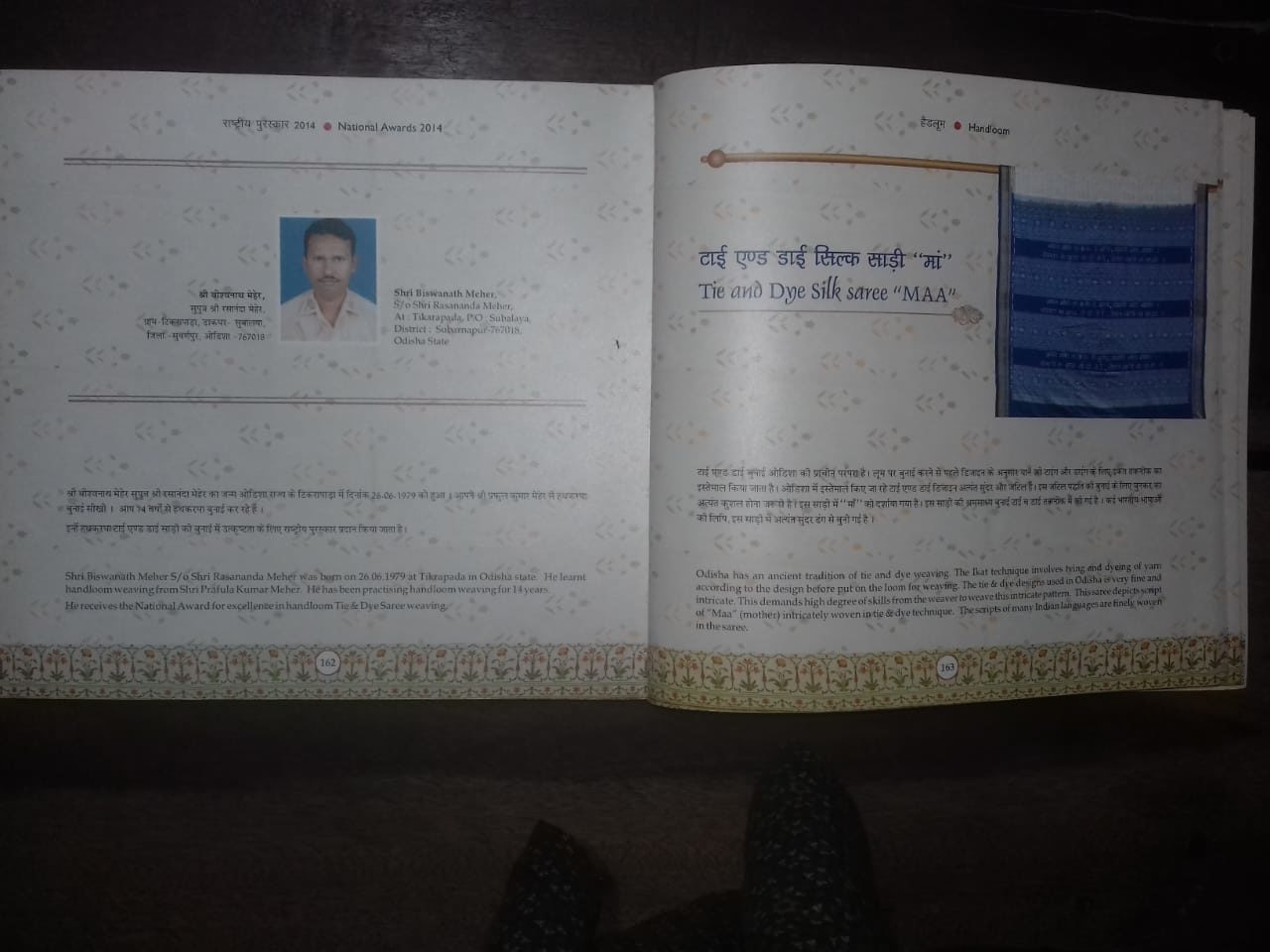 “It is unethical for anyone to claim undue credit or appropriate another’s work.
This is happening in the age of social media and that too when all craftsmen and artisans associated with it are alive. Imagine what will happen when they are not around to defend their intellectual property rights (IPR),” she said, adding the credit should go to the rightful owners.

She said one of the reasons behind the online auction of the Sambalpuri saree weaved with mathematical equations, which Vidya Balan wore, was to let the world know who the real weaver is. “The proceeds from the auction went to Bhagabata Meher, the weaver of the saree,” she said.

Anita advocated strict IPR laws and punishment as a deterrent again such thefts.

“’Sambalpuri Bandha Saree and Fabrics’ have got the GI Tag. Industrial designs should also be registered. The state government on its website should put up details of all state and national award-winning works with names of weavers and weaves so that all can readily refer, learn and know,” she added.