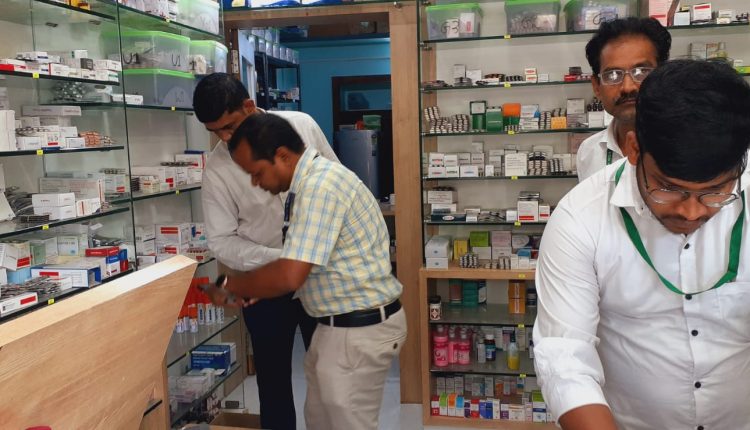 Berhampur: After raids in Cuttack and Bhubaneswar, several teams from the state Drug Control Administration conducted raids at seven stockists and 13 retail shops in Odisha’s Berhampur city over the supply of fake Telma-AM and Telma-40 tablets, which are used to treat high blood pressure.

According to sources, vendors who procured the medicines from stockists in Cuttack are being specifically inspected.

“No fake drugs have been found till now. However, a thorough inspection is being conducted,” Ganjam Drug Inspector (DI) Debasish Kalo told mediapersons.

Kalo said that the stocks are checked every month at various drug stores. A record is also kept on how many medicines get shipped and to which stockists and retail stores.

Medicines are sent from Berhampur city to many districts of south Odisha. There are a large number of wholesale drug stores near Venkateswara Temple, Sana Bazar and Bada Bazar, among other areas.

The Twin City Police Commissionerate on Tuesday arrested two persons on charges of supplying fake Telma-AM and Telma-40 tablets to retailers in Cuttack.

According to sources, the accused, Sanjay Jalal, owner of Puja Enterprises in Jaunliapati, registered in the name of his wife Chanchala, and Rahul Syal, proprietor of VR Drug Agency in Manik Ghosh Bazar, were arrested after being questioned by Purighat police.

The accused, who were absconding, had surrendered in Purighat police station on Monday.

Cuttack DCP Pinak Mishra said a five-day remand of the accused will be sought for further interrogation.

Duplicate Telma-AM and Telma-40 were seized by the state Drug Control Administration during raids on medicine stores in Cuttack and Bhubaneswar last week.

An FIR was lodged after pharmaceutical firm Glenmark clarified that the specific batch of the two medicines that were seized during the raids was not produced by the company.

Distributors had procured the spurious drugs from Bengaluru and Gaya and supplied those to more than 100 retailers.